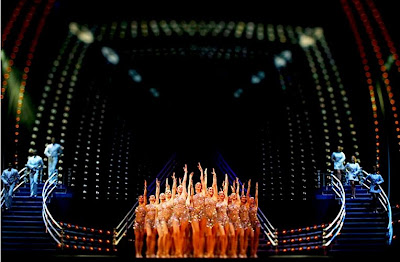 Even the Spectacular Radio City Christmas Show is discounting!

The big, expensive New York City shows have all taken a hit with the downturn in the economy, and it is almost as if Broadway is having a clearance sale.

Certainly a number of blockbuster shows - like Hairspray, Gypsy, Grease and Young Frankenstein - have gone discount crazy. Disney too has reacted to the economic times with wisdom and what amounts to a huge price cut for its tickets to their three Broadway shows. Scroll down to check out our story on discounted Broadway tickets in New York, and across the USA which we compiled last weekend.

Disney has a "Kids Go Free" promotion which yields one free ticket for a child with each adult ticket you buy. First announced several weeks ago - see our earlier blog entries - it has just been extended for the second time, and this promotion is effective on until the day before Christmas for performances that take place early in 2009. It applies to “The Lion King,” “Mary Poppins” and “The Little Mermaid.”

Now there are a couple of important details. First, the window for buying the tickets is very short. During that period, ticket buyers can receive one free child’s admission (18 and under) with each purchase of a full-priced but this is just for performances between January 6 and March 13. Some dates blocked out, including what is school vacation week. To get these tickets, just go to this special Disney website which has been set up for this promotion.

Last week there were plenty of half price tickets for Mary Poppins and The Little Mermaid at ticket agents and TKTS.

Radio City Music Hall Christmas Spectacular has a 40% Off promotion!

The annual outing of the RCMH holiday show is a wonderful and nostalgic treat for adults and children, and there are significant discounts available - as much as 40% - for the remaining shows through the end of December. All you need is the discount code which is DECNYT. You can call the Ticketmaster Christmas Hotline at 212-307-1000 and get a discount using this code. If you prefer to do this on line use this link.
Posted by Larry Murray at 12:15 PM