UPDATE: After three days of corporate warfare, it appears the the DISH Network and Young Broadcasting have decided a cease fire was in order, and the eleven stations removed from the DISH lineup have been put back in service.

However for many of us subscribers, a very bad odor remains behind. DISH is unlikely to recover the high opinion some of us once held of them. Watching them act like big bullies to weaker business partners made me uncomfortable. Indeed their excessively brutal business methods shattered their carefully cultivated PR image. 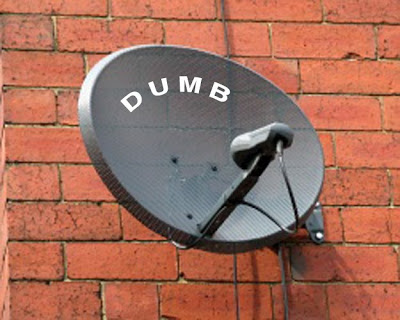 Getting myself involved with DISH was a dumb idea.

The announcement on the WTEN Channel 6 slot on my tuner has something new: Dish Network is continuing to tell one side of the story, trashing WTEN in the process, and asking the Dish subscribers to call a couple of their advertisers and let them know they are unhappy with the station. Dear god, has Dish no scruples? This is more like a battle between the Mafia gangs than a negotiation. What other reason would be to recruit Dish viewers into the nasty game and ask them to call the station's advertisers.

Dish goes further by publishing the phone number of the station manager of WTEN asking their subscribers to harass her with phonecalls while they keep the DISH CEO number well hidden. What a bunch of nasty people.

In any case, shortly after Dish pulled the station off the lineup, and began hurling half truths around in place of the programming, I went to work digging for the other side of the story. And that is in my earlier blog, just below this one in my Arts America lineup. I refuse to deal with half a picture, I wanted all of it.

After coming up with the real issue - less than a penny a day royalty fee to WTEN for each area DISH customer, I wrote DISH and stated my position. Here is that email as I wrote it:

Just a note that if you drop WTEN  coverage I will leave DISH network. It is the only  station that does a good job on the Northern Berkshires weather and news.

Frankly I would prefer a Massachusetts station, but I doubt you would even consider that - it is too logical.

If  they want a penny a day (you charge  23 cents a day for four local Albany stations) pay them. God knows, with all the noisome commercials you guys  should be paying me to endure them in any case.  This is not an idle threat. I have my Verizon deal with Direct TV sitting in front of me, and I will save money in the long run.  Stop being so greedy. Even if you paid each of the Albany stations a penny a day, you would still be keeping 75% of the amount I pay you. You are not playing fair.

I waited several days to see if they disputed what I had written, and how they were handling customer feedback. This is the email I just received in response, and it is mostly boilerplate until you get to the last paragraph and they start pushing the disconnection issue.

In my note above you can see I made a conditional statement: "Just a note that if you drop WTEN coverage I will leave DISH network." Their response seems to indicate that they have decided to do just that, but are doing as much damage as possible to WTEN before pulling the plug.

What kind of people have I been giving my business to over the past couple of years? Certainly not very decent ones. If this is their idea of negotiating, no wonder they have such a poor reputation. Imagine, they were once tops in customer service, but not lately. You can see why in this reply to me, which I reprint complete and unedited:

Effective December 10, 2008, DISH Network’s contract with your ABC affiliate, WTEN, expired and has not been renewed due to the unreasonable contract terms from WTEN’s ownership, Young Broadcasting, Inc. DISH Network has offered WTEN a fair and reasonable increase which it has refused. In the last few years, DISH Network has negotiated for retransmission consent with nearly 1,000 other local TV stations and has reached a fair agreement with all of them. DISH Network will continue to work toward an agreement to restore your ABC programming as soon as possible.   DISH Network remains committed to providing the best programming at the lowest price. The fees DISH Network pays for programming directly impact the price our customers pay, and we are unwilling to subject you to increased costs resulting from excessive and unnecessary license fee demands.

We apologize for any inconvenience and will continue to make every effort to reach an agreement with WTEN. In the meantime, we encourage you to visit www.ABC.com to watch full-length episodes of your favorite shows.

Your business is greatly appreciated and we thank you for allowing us to be of assistance to you.  If you have any further questions or concerns, please refer to (link) or reply to this email.
Sincerely, DISH Network E-Care

I didn't ask to be disconnected, just stated it would be a consequence of their dropping WTEN. Not only did they not answer any of my concerns, but it appears they just want me gone. But it would not be smart of me to be too hasty. There is the fine print in the contract between Dish and me. (They gave very good lawyers, I will give them that!)

Of course, there are some things they have not yet told me. If I cancel, there is no refund for the unused portion of the prepaid service as per their contract. And clearly by telling me to go online to watch ABC there is no concern that they have eliminated an entire network but are still collecting full freight for my subscription.

And to think I once recommended DISH to some neighbors. No more.
Posted by Larry Murray at 8:18 PM

I just had it put in, while the guy was here intstalling it, my wife was looking up the local channels and noticed "her shows" were not going to be on Dish, due to the dispute. I say tey are both greedy. Go to yong broadcasting website. They own WTEN and several other stations. Take a look at thier invesment page. I was $1,57 or so and plumeted to 3 cents. Thye are alos doing this to other cities around america. Also DISH network already pays them, just like they pay the others locals. I dont work for either, you are right and I'm also upset. The shows my wife likes are great shows, Greys Anatomy, Ugly Betty, etc..
This is the same situation wiht my local cable comany, not showing the NFL network. I miss Giant and Jet games, so its all part of the game and we, the consumer get it.
I know it's not the best solution but for now, I have a 4 year old 15.7" widescreen laptop. I went to ABC.com and all of the shows are there, just a day later, so you can watch them over the internet wiht a DSL or other broadband connection for free.
I taled to Dish and they said tis happedn before wiht Young broadcasting and Dish admitted they gave in to them. I think they will resolve this soon, if not ABC wil get into the mix, becouse of commercials not being seen by millions of people. Like I said, Young broadcasting is not just doing this here, it's alos 5 other stations, I thing one near LA. I should be interesting. Any again, take a look at young broadcasting's website. Look at the financial statments, "I can't beleive they even allow that on thier old website,. They bring in Billions of dollars, why are their stock holders losing thier shirts? I think Young Broadcasting should be investigated. Good luck. I hope the channel comes back or maybe ABC will give me rights to bradcast thier stations. I can gather up so geeks and we'll get this done. LOL

The debate that has been raging in the minds of consumers is: which provides a better deal, Dish Network services or cable TV? Many cable TV viewers switched over to dish TV services when they came to know about the advantages that they can have. Satellite TV services have reached a new high with the coming of Dish Network, sweeping aside competition from cable TV services.

In his comments, Michael who obviously is working the social networks and blogs for Dish TV tells us that the choice is between Dish TV and cable. He forget his superior competition, Direct TV in his efforts to get you to switch.

However, I did finally leave Dish TV because of their inferior service and constant price increases, and went to Direct TV since, for example, they let me see MSNBC in their included lineup, while Dish does not. Dish goes after the football addicts, and that is fine, but Direct TV I found carries the gay oriented Logo channel for those of us who like our entertainment less mainstream and more diverse.

So if you are thinking of satellite, be sure to check out all the offerings, and consider whether you can get most of your entertainment off the web as well. With the ever more toxic level of commercials on all the paid services, it makes sense to look for alternative fare that does not waste 1/3 of your time with mindless appeals to eat more, buy more, medicate yourself more.