Waiting for Godot - An Opera by Pierre Boulez? It might happen. 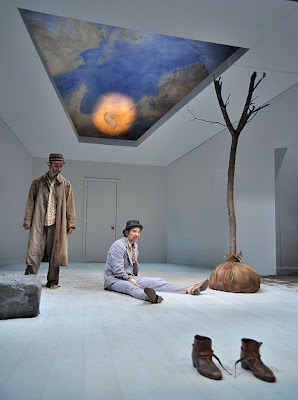 The Berkshire Theatre Festival's 2008 production of Waiting for Godot had an almost-operatic set. Kevin Sprague photo.
Normally you don't find insider gossip here, but this rumor has a fine provenance, and is being printed by some mainstream UK sites, so it is worth passing along.

It is being reported that Pierre Boulez, the French composer and conductor, is planning to make an opera from Samuel Beckett's most famous play, Waiting for Godot. According to Charles T. Downey at Ion Arts, Beckett is not only planning to write a Godot opera, it is going to be presented by La Scala in Milan in 2015. Peter Gelb (General Manager of the Metropolitan Opera), where are you in this? It's going to be the hottest opera of the 21st Century!

"… the sound thus obtained had a 'spatialised' richness, which, without requiring any electronic aid, could be of interest to Pierre Boulez for the opera that, according to our sources, he will adapt from Beckett's Waiting for Godot, planned for La Scala in Milan in 2015. - Ion Arts"

His source is, in turn a review in the June 15 Le Monde. 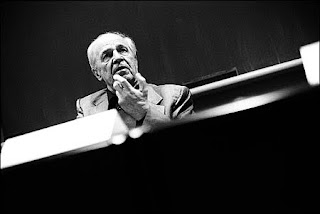 Pierre Boulez, composer and conductor.
It's certainly true that Boulez has wanted to write an opera for a while. Talking to the U.K.'s Telegraph in 1996, he confirmed that he corresponded with the playwright Jean Genet about working together in the 1960s, as well as the German writer Heiner Müller in 1995, and that a year later he was thinking about adapting Edward Bond's plays for the opera house. None of these plans ever came to fruition.

Whether the legendary composer and historic opera house have bothered to check in with the notoriously sniffy Godot estate, I have no idea. Based on the rigid and dust-preserving tendencies of the estate, (read this tale of Endgame in the current Berkshire On Stage) I seriously doubt it. It would be news if they allowed an adaptation. They fight fiercely to preserve every word, every pause and gesture of Beckett's infamous and inscrutable play.

Yet if the composer used the play's script as its libretto, word for word, and followed the prescribed action to the letter, I don't see how they could object. And it might be easier in French than English, since Beckett wrote it first in French before doing his own translation back into English. Odd man that Beckett.

This one is worth watching.
Posted by Larry Murray at 2:32 PM No comments: