The creator of Pangea Day

Each year a few special people are given the opportunity to reveal their deepest wishes at the TED Conference. In 2006 a nervous Jehane Noujaim shared her vision for world peace with the TED attendees. A documentary filmmaker of amazing vision and grace, she was given a grant to make this a reality. But this is more than about charitable contributions, since TED attendees also have a desire to support its grantees and make sure the dream becomes reality. This is my small effort to spread the word.

Here is the talk that began the work on Pangea Day in motion.

The TED conference is an annual event and the acronym stands for Technology, Entertainment and Design. For more of these amazing talks on video, and the list of amazing people who have given them, visit the TED site. The best part is that the talks on line are absolutely free. It costs upwards of $4,000 to attend, with some of the fee used to support worthy projects like this.

The TED Talks
Posted by Larry Murray at 11:27 PM 2 comments:

The world will come together again. 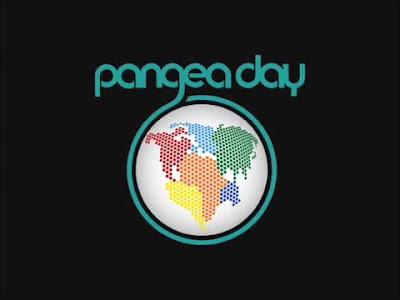 Pangea Day is a worldwide celebration of our common humanity, expressed in unique films by people like you and me. It will take place on May 10, 2008, and in the Berkshires the films will be screened at the Colonial Theatre in Pittsfield from 2 to 6 pm. It is but one of thousands of venues in more than 60 countries around the world. Admission is free.

Here is the website for complete information on the event:

As many of you know, I am a big fan of the TED program, and here is what curator Chris Anderson wrote me in an email:

"The best way to watch Pangea Day is not just as a normal TV show or web-stream. It should be watched as a community event. We want the sense of the great global village gathering around a campfire. We already know of more than a thousand self-organized screenings taking place in homes, clubs, and movie theaters. We expect thousands more come May 10.

As many of you know, the day is the result of the combined efforts of countless TED supporters around the world, inspired by the TED Prize wish of film-maker Jehane Noujaim. She dreamed of a day when people around the world could share the the same film experience at the same time. The idea has grown into a giant global project... thanks to you. To get a sense of the scale of ambition, please take a minute to watch this beautiful trailer.

Here's the state of play:
- Out of thousands of submissions, we have assembled a fantastic line-up of films. There are about 20 in total, ranging in length from 2 to 15 minutes (most of them around 5). They all tell powerful stories, often without language, of what it is to be human. They are, by turns, funny, touching, dramatic, inspiring.
- But you won't just be watching films. You'll be watching the world watching. We're bringing in live audience images from around the world. Watching a film about reconciliation is one thing. Watching it while simultaneously witnessing the reactions of people who are supposed to hate each other will be something else altogether.
- The day also features a dozen powerful three-minute talks from scientists, film-makers, story-tellers and global visionaries. Just as a session at TED takes us on a journey stimulating every part of our brains, so will Pangea Day. Don't dismiss it as a warm & fuzzy peace-fest. The project builds on the latest ideas in anthropology, psychology and technology. We'll be revealing how.
- The whole program is being broadcast in front of a live audience of 1,000 (from more than 50 countries) at a spectacular set being built at a Sony Studios soundstage in Los Angeles.
- It will look and feel like nothing you've seen before. "

I will post some examples as they become available.

Here is "France sings for the USA":

And Japan sings for Turkey (amazing!):