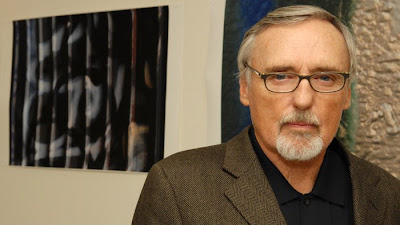 Posted by Larry Murray at 10:39 PM No comments:

Broadway has another Billion Dollar Year 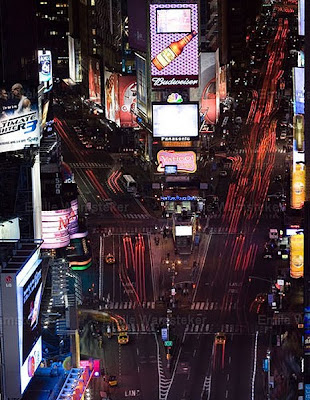 Actually, only a couple of theatres are on Broadway itself.

Grosses are up 1.5% from last season's absolute numbers (which do not include Young Frankenstein*). Attendance is down 3.0% from the 2008 – 2009 season, also using absolute numbers.

Charlotte St. Martin, Executive Director of The Broadway League, said, “Using the numbers we know, grosses were up 1.5% over last season. However, if we factor in estimated figures for Young Frankenstein which ran 32 weeks in 2008 – 2009, it could be down slightly this season – perhaps as much as 1.0% in grosses. In any case, it seems that even in this current economic climate, the numbers are strong thanks to the vibrancy of this season's offerings.“

The League recently studied the demographics of theatre-goers and found that, for Broadway, international visitors accounted for one in five admissions. Tourists in general accounted for a whopping 63% of Broadway admissions, though that could be a misleading statistic since under their parameters I would be considered a tourist, not the Broadway regular I consider myself.

The report also shows that the use of the Internet for the purchase of tickets has grown by 471% since the 1999-2000 season (from 7% to 40%). Online purchase was the most popular method of ticket buying for a fifth year in row.

The more important figure was the gross attendance and that was 11.89 million in the last year, vs. 12.25 million the year before, representing a decline.

Broadway audience is aging
The average age of the Broadway theatregoer was 42.2 years old, slightly older than last season, while those aged from 25-34accounted for 16% of all tickets sold, higher than it has been since the 1999-2000 season. But younger audiences generally seem to prefer the more edgy (and cheaper) offerings of off-Broadway and off-off Broadway houses.

Broadway theatregoers were a very well educated and affluent group. In addition to an annual reported income of $195,700, 73% of theatregoers over the age of 25 had completed college and 36% had earned a graduate degree.

“Broadway is a national pastime! As there is more of a choice for the theatregoer than ever before, it is exciting to report that we are seeing a wider audience for Broadway. Our shows, and our audience, are more diverse than ever,” continued Charlotte St. Martin. “With our goal to make Broadway a stronger international brand, we do believe that the increased attendance from foreign visitors to New York City reflects that these efforts are working. A stronger international brand will not only be an asset for Broadway’s business, but for the New York City economy as well.”

*Estimates for Young Frankenstein, which played 32 weeks during the 2008-09 season are not included here (previews began 10/11/07, closed 1/4/09 ) The producers refused to cooperate with the Broadway League and insisted on keeping their numbers to themselves.
Posted by Larry Murray at 12:52 PM No comments: 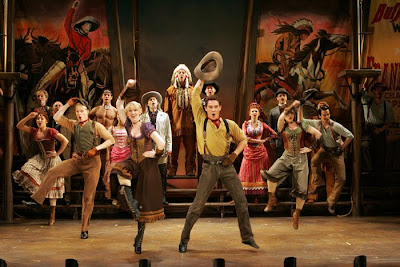 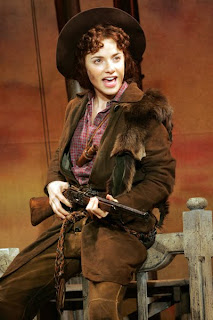 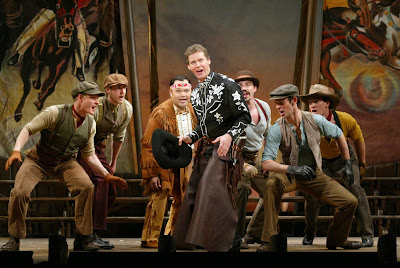 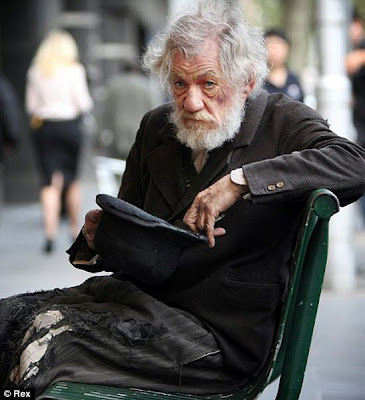 Sir Ian McKellan mistaken for a bum by a passerby who dropped a dollar in his hat.
If there is anything more dangerous than a "method" actor, it's a "method" costume designer. Put the two together and the public can be easily fooled.

Ian McKellen was taking a break during rehearsals for Waiting for Godot which he and Roger Rees (former Williamstown Theatre Festival Artistic Dirextor) first did in London and are now performing in Australia. 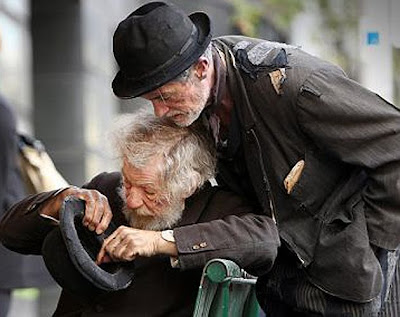 Roger Rees (top) and Ian McKellan take their routine on the road.

As fate would have it, Sir Ian is sitting a short distance from the stage door, Estragon's bowler in hand when a passerby takes one look at the aging, threadbare actor and drops a dollar in the hat.

Of course, that prompted the publicist to set up some photographs which we most happily reprint here. 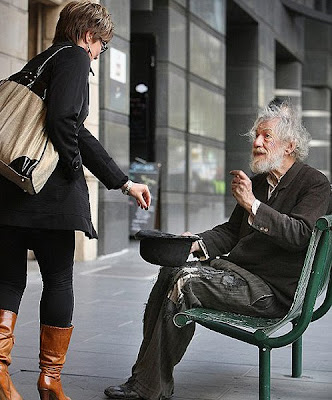 McKelan hopes the Melbourne critics will be as kind.
After Waiting For Godot finishes its run in Melbourne, it will continue on to Sydney, Adelaide and Perth.
The Samuel Beckett play was a huge success in London's West End, with Sir Ian starring as Estragon opposite Patrick Stewart's and then Roger Rees's Vladimir. 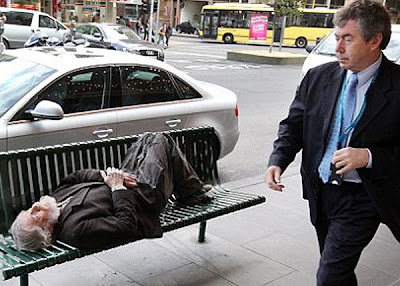 Sir Ian McKellan attracts stares as he continues to wait for Godot in full public view.

You can ead more at: The Daily Mail.

Sir Ian has a wicked sense or irony:

Posted by Larry Murray at 1:19 PM No comments: 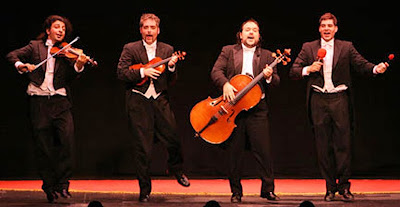 The Pagagnini Quartet.
They begin as any chamber concert does, with a pensive pianissimo passage of a Bach Brandenburg or the Pachebel Canon in d. Their playing is superb. The audience is rapt. Then...cleverly choreographed chaos erupts. The Pagagnini Quartet is off and running and the evening erupts in hilarity. It's about as entertaining as classical music ever gets.

Descended from a squiggly line of classical clowns, from Spike Jones (Carmen Ghia) to Anna Russell to PDQ Bach, the Pagagnini foursome is clearly out to have a good time. Their audiences respond with endless cheering and laughter. The group, from Spain, is about to appear in New York City and we want to be sure you know about them.

Their high voltage show makes quite a racket, and the choreography requires their playing to be almost acrobatic as they pluck, bow and abuse their instruments in the name of art. This video will give you a good idea of what they are up to.

They play the New Victory Theatre in Manhattan from May 7 - 23. Performances are Fridays at 7pm, Saturdays at 2pm and 7pm, and Sundays at 12pm and 5pm.

You can also order on line directly from the New Victory Theatre. Again, when prompted, enter the code GAG1915 for your special pricing. Or bring a copy of this advance story to the box office at 209 West 42nd Street.
Posted by Larry Murray at 10:55 AM No comments: