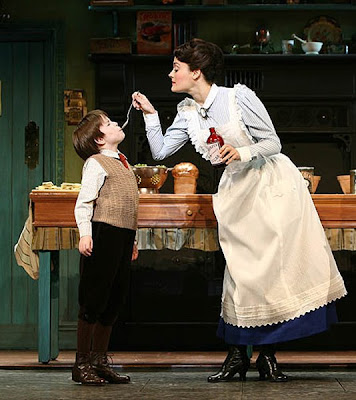 Disney's "Kids Go Free" promotion is working like a charm. With more than a million dollars worth of tickets sold in the first three days, and little more than a week to run, it appears that for every ticket given away to a child, one was sold to an adult. In these recessionary times, Disney proves it knows its marketing.

There are other ways to get discounted Disney tickets, though not as well known, but you will have to sacrifice a little of your time in order to access them. But that is the deal - if you are in a hurry, you pay full price. 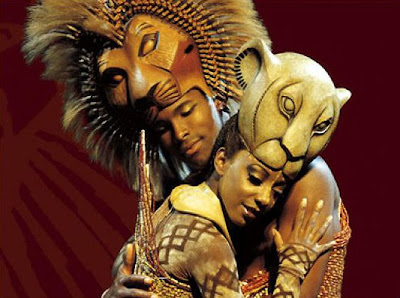 The Lion King is not just for children.

The Broadway ticket brokers and ticket agents have not been immune to the recession, and often end up having bought more seats than they can resell at full price. So a great new strategy is to email or call these brokers and let them know when you want to go and ask if they have any deals.

Sometimes you will get an offer right then (a bird in the hand and all that) and you should be prepared to make a pretty fast decision. Though many will pressure you to act instantly, it is reasonable to tell them that you have to check with the others first. Even with a short grace period, calling them back as soon as you can is a good idea since their ticket inventory is limited and usually the first person with the money takes them regardless of promises made.

Alternately, if you email you can ask them to email you any late breaking deals for the dates you are interested in. Some will, some won't. Since tickets are in a constant state of flux, it is not possible to predict.

Armed with a seating chart and open dates, you can also be a well informed consumer when you do this. My number one rule of thumb is to always ask early on if the prices quoted include all service charges. Then, if some place down the road a surprise fee is added to the conversation, think twice about dealing with that broker. 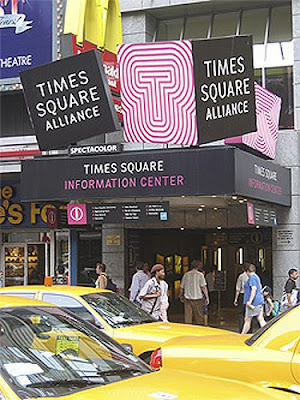 The Times Square Info Center between 47 and 48 Streets

Should this strategy fail, and I arrive in midtown Manhattan without tickets in hand, I do check for what are called "twofers" at the tourist information operations. These are ticket sized coupons that often offer large discounts direct from the box office. The one pictured is on Broadway near Times Square and easy to find.

My final option is to stand in line at theTKTS booth in Duffy Square where tickets are always sold at 25 to 50% off. I will be writing more about them in the near future, so you might want to subscribe to this blog to keep up with cheap ticket strategies and offers. 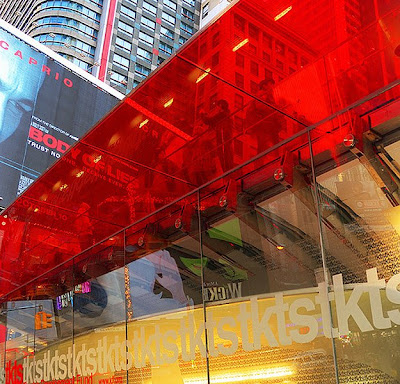 The new Half Price TKTS Booth

Buying from the box office, whether at full price or a discount can be a smart strategy too since you do not pay the Ticketmaster surcharges which often add insult to injury. I would rather give those service charges to the independent brokers who got me a real deal.

So now the question is, which Disney show. Here are some capsule descriptions of the three currently running: 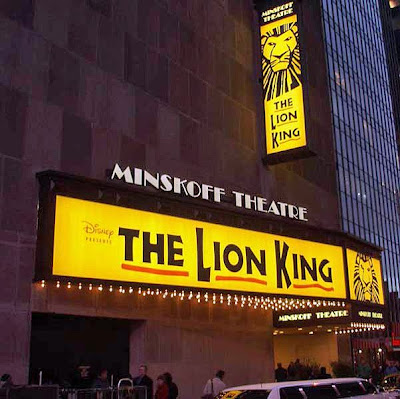 The Lion King is at the Minskoff Theatre

I simply adore this show. Disney’s beloved film comes to eye-popping life with Julie Taymor's amazing staging. Winner of six 1998 Tony Awards, including Best Musical, The Lion King pulses with an award-winning score and innovative choreography, costumes and masks which bring the classic story of the young royal heir Simba and the animals of the African Pride Lands to vivid life. 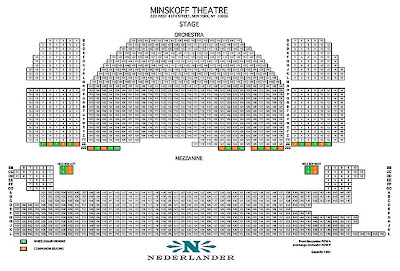 Even with a top price of $110 on weekends, the Lion King is the most difficult Disney show to find discounted tickets for. This one show brings Disney almost a million dollars a week in ticket sales. No mere high school musical can compete with the large cast and orchestra which have made this the longest running Disney show. 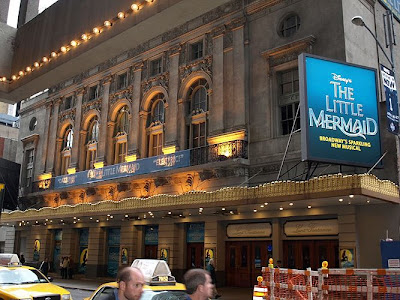 The Little Mermaid at the Lunt Fontanne Theatre

An underwater advanture with Ariel the mermaid in this splashy Disney musical. In a magical kingdom beneath the sea, a beautiful young mermaid named Ariel longs to leave her ocean home to live in the world above. With award-winning music by Alan Menken and Howard Ashman, The Little Mermaid is a musical favorite for audiences of all ages. 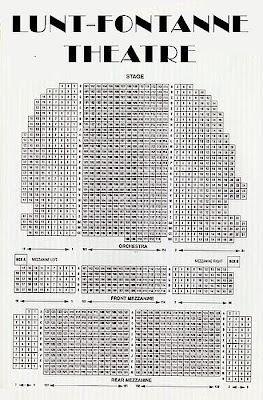 There is a fairly steady supply of discount tickets for The Little Mermaid. 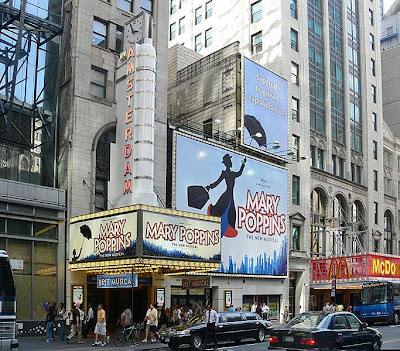 The young ones will experience a supercalifragilisticexpialidocious time with everyone's favorite nanny. Based on P.L. Travers' stories and the classic Disney film, Mary Poppins brings to life the story of the Banks family and their magical nanny. Featuring the movie's Oscar-winning songs, this enchanting musical lets you rediscover the power of family and the joyful memories of childhood. 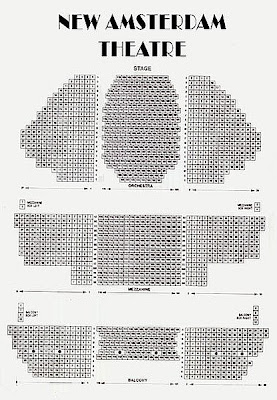 Of the three Disney shows, Mary Poppins is the easiest one to find offered at discounted prices.
Posted by Larry Murray at 9:52 AM