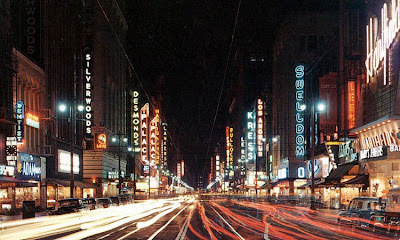 The glory of a bygone era.

Los Angeles has always been more of a film town than a stage town, and the rotting corpses of its glorious old theatres is a scandal and a crime against culture. In one section of downtown LA there are more than a dozen magnificent film houses, many of which are suitable for live performances. A new campaign has been mounted to preserve some of them, perhaps to even begin showing films in them again, though it seems a distant dream.

As the film industry seems destined to decline as did vaudeville, radio and legit, the odds seem to be turning. Las Angeles has a growing number of performing arts organizations and as their roots grow deeper, they are beginning to attract larger audiences. Many film actors are taking to the stage in a reversal of trends. We can hope this continues, and the public increasing rejects the superficial commercial-laden offerings of the bloated tv and cable networks. There is something to be said for performances that provoke and enlighten, rather than deaden and treat human beings like idiots.

The LA Stage Alliance has a number of discount programs where you can get helf price and discounted tickets. You can even search by date on their website, a wonderful feature. Their list of offerings is incredible.In fact, I think the marketing seen here is the finest in the country, a model for other cities.