Time to rethink the importance of ticket buyers? 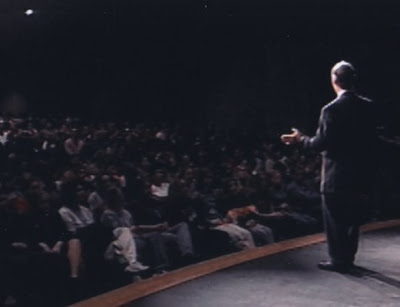 The increasingly common pre-show appeal.
One of the most annoying things to run into after spending $100 or more on some tickets is to sit down in the theatre and be taken on a guilt trip.

"Your ticket purchase only covers 50% of the cost of this performance." the program insists, so "Contribute now!"

Well, "thank you for thanking me" for my support. For your information, I took the trouble to set an evening aside, arrange a baby sitter, dress up a bit, and drive 45 minutes to your theatre where I can then search for a parking spot, stumble around in the dark for a few minutes, and finally sit down and relax. And after all that I am greeted with a plea for more money.

I look around and see quite a few empty seats, especially if it is not a Saturday night, and wonder at the incongruity of the demand. Gee, maybe if you sold all those seats, you wouldn't have to be badgering me for yet more money. Then there is the increasingly common pre-curtain speech, asking again for money, reminding me of how tough the economy is.

Today, Douglas McLennan, publisher of the Arts Journal addressed this issue in his diacritical blog . He is the go-to person for much of the national arts media, and knows of what he speaks. It isn't that arts supporters are ignorant of the need for funds for our nonprofits, nor that we begrudge them either, but that the ticket buyer is so often treated as just another sheep to be sheared.

They are perhaps an even more valuable resource than most arts organizations realize. They deserve effusive praise, not badgering. Every theatre has a development department, one that specializes in fundraising, but audience development is a neglected art.

A ticket sold isn't just a ticket sold. One audience member isn't the same as another. Communities are hierarchical, and if you can identify the hierarchies and incentivize them you can push people up the ladder. Along the way they'll do things for you (and for themselves). People like to be rewarded for engaging with you.

Sure the performance should be enough reward, I know. But if word-of-mouth is the most powerful way of getting more people into the theatre, how do you promote that word-of-mouth? If you have an audience member who brings five friends, find a way to reward them. If they bring 10 friends, give them something more. - diacritical blog 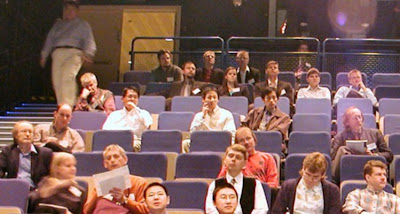 Those empty seats are revenues lost forever.
When I joined founder E. Virginia Williams at the Boston Ballet a dozen years after it began, the company was generating about half their income through ticket sales and other "earned" income. By focusing on the little appreciated craft of audience development, we upped that to 90% in the space of two years. And drove the box office crazy because most of these were subscriptions, and that did not leave much room for single ticket sales. We lowered the costs of finding new ticket buyers as well, using the same budget that used to fill half a house to fill almost all the seats.

The key to our success was that everyone started thinking about the audience in a different way. It was a complex and often subtle series of changes that were made in the marketing and promotion. Two years later the audience had doubled. The development department was thrilled to have twice as many fundraising prospects, too. When the whole company - audience development and fundraising, artistic and administrative work from the same game plan the synergy is amazing.
Posted by Larry Murray at 1:14 PM