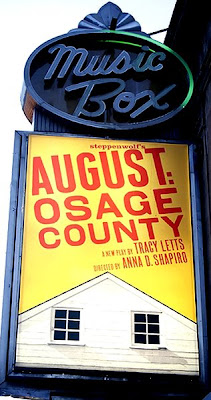 A vanished father. A pill-popping mother. Three sisters harboring shady little secrets. When the large Weston family unexpectedly reunites after dad disappears, their Oklahoman family homestead explodes in a maelstrom of repressed truths and unsettling secrets. Mix in Violet, the drugged-up, scathingly acidic matriarch, and you’ve got a major new Broadway play that unflinchingly – and uproariously – exposes the dark side of the Midwestern American family.

And we have discounts.

These ticket discounts are valid for performances through June 28, 2009 at the Music Box theatre, 239 W. 45th Street. The least expensive are $46.50 saving you up to 60% and are in the rear mezzanine, rows G-L. They are regularly $76.50 to $116.50 depending on the day. There are also Orchestra and Front Mezzanine tickets, Row A-F for Tuesday to Thursday at $59.50 which saves almost 50%. If you must go on the weekend, there are similar Orchestra/Front Mezzanine tickets Rows A-F for $66.50 which still saves 40%. 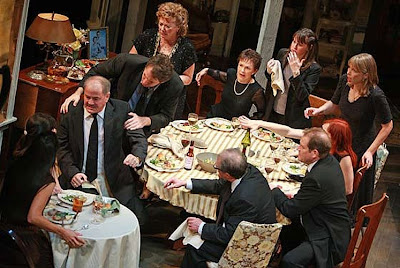 The Westons have secrets, shocks and surprises for each other.

The embedded You Tube promotional video above gives you a taste of the show, but this little gem I found on YouTube gives you not only a great sampling of the script, but introduces two gay You Tube actors, Michael Arden and Jeffery Self who have been producing some pretty funny stuff. If they were in the Berkshires, I would pair them with one of our resident theatres as social networking geniuses. They've got promise as actors, too. They have a future in their future.