Desire Under the Elms Closing Six Weeks Early: An Autopsy 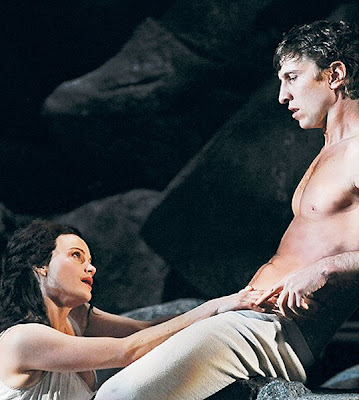 Mostly, I think it was the promotion. It simply sucked. Selling O'Neill is not an easy task, and you don't do it using the same photographs that served it in Chicago, and even worse, butchering the images to make the production look like something being put on by your local community theatre group. Then, there was the one page website, the lack of any attention to viral marketing, and pretty much total ignorance of the online world in their efforts. Looks to me like they hired their pr people on either the basis of the lowest bid or nepotism. Whatever it was, it really started this show off with a handicap. 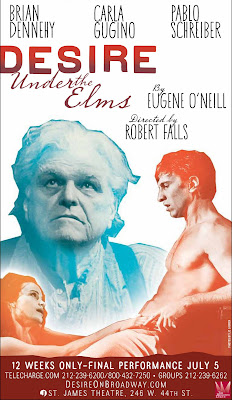 This is supposed to sell tickets? Maybe fifty years ago.

The poster shown above is awful. Wrong colors, wrong typeface, wrong everything. No clue other than the suggestive pose as to what the show is about. Then there was the slap in the face by the Tony Award nominations - there were none. Zilch. So the show is not running to the July 4th weekend, it will last only to Memorial Day, and even the New York Times is flogging discount tickets to keep it going until then. I feel bad for the producers, including Jujamcyn Theatres which owns the St. James which sunk a quarter mil in it to bring it to Broadway.

In these tough economic times, the one budget you do not cut is marketing and promotion. Selling tickets is harder than ever, and you need real pros to be sure the whole investment doesn't go down the toilet. This show died from a lack of understanding just what motivates audiences. It could have gone down in the Broadway record book as a successful O'Neill revival.

Damn shame, too. It could have been saved.
Posted by Larry Murray at 10:46 AM