Barack and Michelle Take in a August Wilson Play 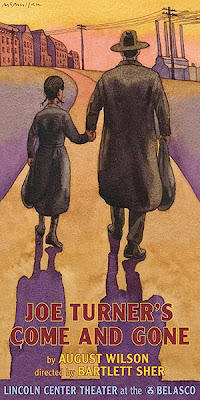 The First Couple spent a Saturday Evening out, like so many of us, at a play. Not since the Kennedy days have we seen a President and First Lady take so much interest in the arts.

POTUS and FLOTUS flew into New York, not on Air Force One, but on the more economical 12 passenger Gulfstream, in a smart move. They had dinner in the Village (at Blue Hill) before heading to the Belasco Theatre in Midtown to see August Wilson's Joe Turner's Come and Gone, a drama about black America in the early 1900's. It tells the story about the residents of a run down boardinghouse who migrated from their Southern sharecropping existence to the promise of the industrialized North.

The cast only learned of the Presidential visit in the morning, and the audience arrived to extra security precautions, but took it all in stride. "When you go to the theatre, you are used to seeing famous people," commented one ticket buyer, "but yeah I'm totally going to stare at them," she said. Meryl Streep sat a few rows from the President, but nobody seemed to notice. 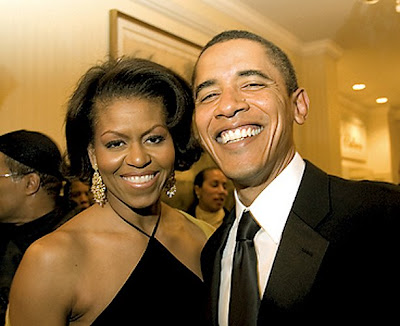 A night out for the First Couple
Obama said in a statement to the media that he had promised his wife "during the campaign that I would take her to a Broadway show after it was all finished."

As might be expected, The Republican National Committee put out a news release titled “Putting on a Show,” which chastised Obama for hopping up to New York for "a night on the town". Of course the RNC somehow forgot to mention the record of their own President Bush who used the far more expensive to operate Air Force One to fly back and forth to his "ranch" in Crawford more than 60 times.

Hardly anyone paid attention to their silly side show. Obama sprung for the theater tix out of his own pocket.
Posted by Larry Murray at 1:34 PM