Thank you. Anthony Amato, for Introducing me to Opera 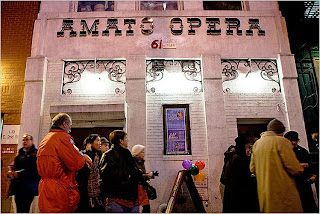 The crowd arrives for the final performance.
After 61 years of making opera available and affordable to all the people, Anthony Amato, now 88, presided over the last performance of his company, Amato Opera, in his little building in the Bowery of lower Manhattan. His lifelong quest to showcase rising opera singers and present Grand Opera in a miniscule 130 seat space has come to its end. He deserves my applause, and tears of sadness that such a simple operation has reached its conclusion. Without Amato, I would have never found the joys of opera. 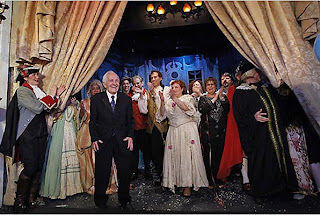 The final curtain call.
While I was still attending High School, I used to sneak out of the house and venture into Manhattan on the Long Island Railroad for long weekend days and nights of Radio City Music Hall, the old Roxy Theatre, half price tickets to Broadway shows via the Stubs promotion, and standing room at the Met when it was on 39th Street. Most tickets were a buck or so, though even standing room at the old Met was more than my meager lawn-mowing and caddying money could support. When I discovered Amato, back when he was in even smaller quarters on Bleecker Street, it was a voluntary contribution that got me in, and some kid throwing two bits into the basket didn't bother them in the least. That is why they were there. 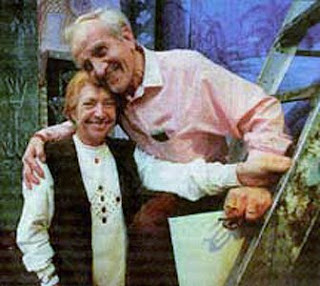 Amato with his beloved Sally he loved dearly.
And, oh, the operas I heard! Mostly Verdi and Mozart, but once in a while some of the others like Bizet's Carmen, simply produced and gloriously sung. I can still close my eyes and see Amato waggling his baton at the twin pianos that were his orchestra for many years. In recent years, this has been supplanted by synthesizers and woodwinds and whatever other players he could recruit. 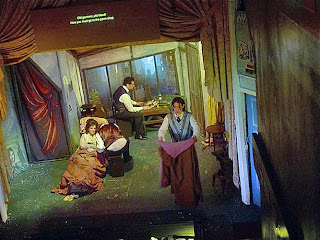 Amato's La Boheme with supertitles.
There is a collection of wonderful, evocative photographs on photographer and fellow blogger Stefan Falke's Eye site which I urge you to view. If you ever dropped by their building at 319 Bowery, his images will bring back that experience. And they are wonderful images as well.

But don't think we have heard the last of Amato. Following the final performance on May 31, he promised that we would be hearing from him again. He has plans to establish a scholarship program for opera singers, conductors and directors. His life's work continues.

Thank you, Anthony. Mille grazie.
Posted by Larry Murray at 11:13 AM