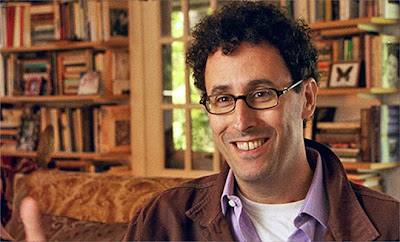 Tony Kushner, the playwright.
Tony Kushner, who wrote Angels in America, is one of our most fascinating playwrights and totally fearless in what he says.

"For all the hyperbole that greeted President Obama’s nomination of Broadway impresario Rocco Landesman to chair the endowment — “potentially the best news the arts community in the United States has had since the birth of Walt Whitman,” playwright Tony Kushner said — neither the appointment nor the $50 million in stimulus money the president is steering the endowment’s way is likely to bring about a change in its culture."

Quoted in the The National Review

"I was excited to see a bus go by a couple of months ago when I first got to Minneapolis and the only words you could make out as the bus went by were 'homosexual' and 'socialism,'" Kushner says, adding that the first thing he did when he saw it was call his husband back home in New York City."

"When Tony Kushner agreed to premiere a new play at the Guthrie Theater, the artistic director wanted to know what it would be called. Kushner responded with a mouthful of a title that had been knocking around in his head for more than a decade: "The Intelligent Homosexual's Guide to Capitalism and Socialism With a Key to the Scriptures." Kushner explained: "Joe Dowling needed a title, and I figured well, I can make this play about absolutely anything and somehow or another, that title will carry it,"

"It's becoming harder and harder for people to make a living if they try to make it purely from writing plays," he says. "Most playwrights do what I do - screenplays, lectures, teach - to supplement their income."