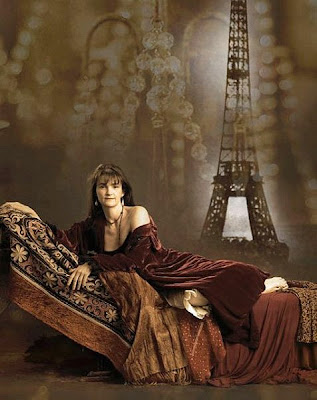 Paris 1890 Unlaced!
Kevin Sprague photos.
There was a full house for the Opening Night performance and Reception for Paris, 1890, Unlaced at Ventfrot Hall Mansion and Museum of the Gilded Age. The play was commissioned by Ventfort Hall from playwright and author Juliane Hiam and features the marvelous Anne Undeland in multiple roles. Sarah Taylor, formerly of Shakespeare & Company, directed. For more information please go to http://www.gildedage.org. Most of the wonderful photos are by Kevin Sprague, who seems to have become the documentarian for theatrical history in the Berkshires.

Juliane Hiam who wrote the play was able to travel back in time and conjures up the memories of a young courtesan from the era when the Eiffel Tower was built. It was the period in which Monet, Renoir, Degas and Toulouse-Latrec walked the streets of Paris and frequented the nightclubs. 1890 was the year that Debussy composed Claire de Lune. It was a very different time, one of sexual repression but in Paris, things were already becoming more modern. The 1890's are also when the first playwrights began writing realistic theatre, the plays of Ibsen, Shaw, and yes, even Feydeau that are the foundation of modern theatre. 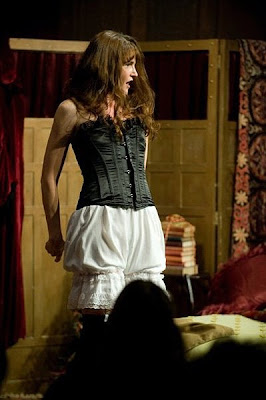 Undeland in performance.
Anne Undeland captures the Belle Époque in her characterizations of the four or five women we meet in the play. They were known as The Grand Horizontals. I can not help but wonder if the customers were called The Grand Verticals. Or possible the Petite Perpendiculars.

In mid-nineteenth-century France, frigid and frail was fashionable. The perfect woman was timid, submissive, and lacked "sexual feeling of any kind." Just when it seemed that it was possible to keep women quiet and under control, the Grand Horizontals appeared. These famous courtesans wreaked havoc in Paris for almost twenty years. They were relentless hedonists in the true sense of the word: they loved pleasure, money, and mastered the art of seduction.

Each afternoon at 5pm they rolled through town in custom carriages while mobs of flustered onlookers watched from the sidelines. The tabloids recorded their adventures in details: "masked balls, dinners of peacock galantine, and preposterous stunts." From The Fact Box Blog 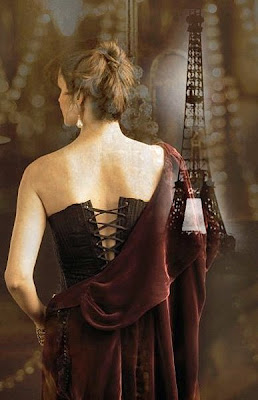 The lacing and unlacing was a turn-on.
At the performance I attended, there were five women for every man there, perhaps to learn a few tricks, or for pure historical background. It did seem to me that in delivering her performance, Anne Undeland engaged her audience directly, fixing her gaze on each and every person seated there, drawing them in - seducing them, even - into her world of pleasure. Many members of the audience had smiles on their faces throughout the show. As much as it is a testament to the power of a good performance, it also speaks volumes about seduction and sexual attraction.

The play keeps moving thanks to the swift pacing of director Sarah Taylor, and brings to light an intriguing mystery featuring five women – all performed by Ms. Undeland: “Juliette,” a contemporary Gilded Age Museum director, “La Crème,” an infamous Parisian courtesan; “Hettie,” the wife of La Crème’s benefactor; “La Chapellier,” a very talkative milliner; “Gertrude,” an American innocent abroad; and finally, “The Virgin,” a flash-in-the-pan celebrity in the Montmarte nightclub scene – singer, dancer, aspiring courtesan. In Citizen Kane style, as we hear from each successive character, we come a little closer to solving the mystery around which the entire play is constructed. 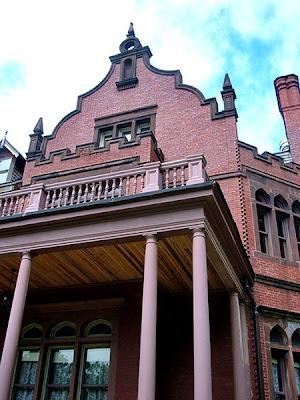 Ventfort Hall is one of 75 Gilded Age mansions built in Lenox.
My friend and colleague Gail Burns has written a marvelous review and overview of this play at Gail Sez. It's a historic and fun look at this from the woman's perspective. Paris 1890 Unlaced plays until September 6, 2009 and if you are the least bit interested in this period of history, or in how incredibly magnetic these courtesans were, you should not miss this play. It runs just over an hour without any intermission, and tickets are $22.00. Yes, it is slightly risqué. 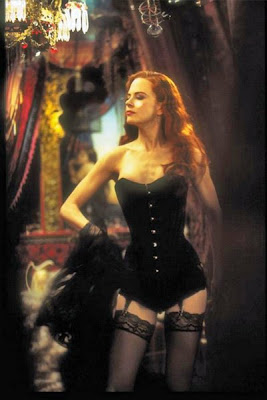 Nicole Kidman played a courtesin in Moulin Rouge.
You can reserve tickets by calling 413.637.3206 or visiting http://www.gildedage.org Ventfort Hall is located at 104 Walker Street, Lenox, MA 01240 but keep alert, they are set back in the woods, and their street entrance sign is tiny. 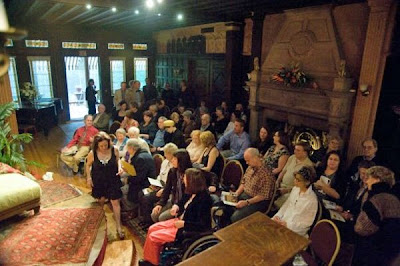 The playing space is intimate.