CAROUSEL - A Review in Photos and Words 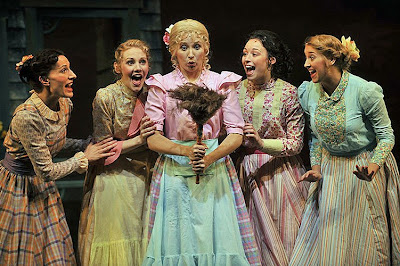 The Company. Kevin Sprague Photo.
Looking through the photographs Kevin Sprague took of Carousel, now at Barrington Stage in Pittsfield, you are immediately drawn to the story behind them. Sprague, perhaps the most gifted of the Berkshire's many fine photographers has outdone himself on this show, masterfully bringing the art and craft of photography together in a series of unforgettable images. We are pleased to present them here, and you can click on those you like to get a larger, more detailed image. 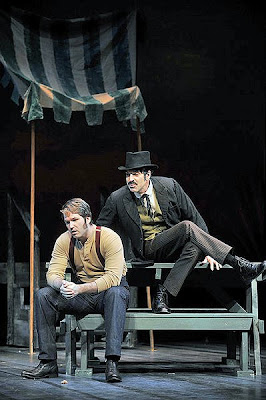 Aaron Ramey and Christopher Innvar as Billy and Jigger, up to no good. Kevin Sprague Photo.
Carousel opens the 15th Anniversary Season of Barrington Stage Company, and artistic director Julianne Boyd has developed a well deserved reputation as the master of the musical. This time out, however, there are several masters at work since musicals are always a collaborative effort. The other key artists are of course, Richard Rodgers who wrote the music, and Oscar Hammerstein Ii who wrote both the lyrics and the book of the show. Carousel was first presented in 1945 and has been performed countless times since. It is a classic. It followed their first venture, Oklahoma! which was born in 1943. 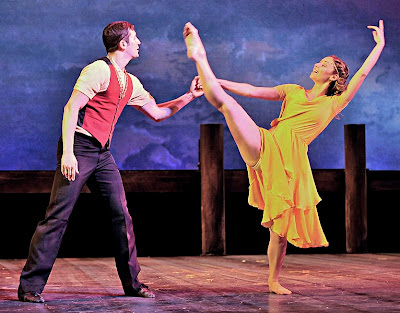 Kristen Paulicelli and Al Blackstone, Principal Dancers. Kevin Sprague Photo.
Both Carousel and Oklahoma included ballet sequences, a stunning innovation in their day, created by the legendary Agnes De Mille. Boyd retains this wonderful element which successfully integrated dance into the musical's plot. Instead of functioning as an interlude or divertissement, the ballet provided key insights into the heroine's emotional state. The Barrington version is not an exact duplicate of the De Mille, but close, and is staged by Joshua Bergasse. Working with principal dancers Kristen Paulicelli and Al Blackstone, the dance sequences steal the show, creating moments of both rare beauty and deep emotion. Bravi. 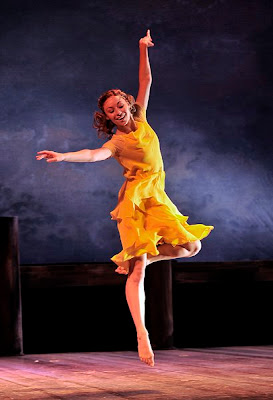 Kristen Pauliceli captured the spirit of Louise perfectly, as did photographer Kevin Sprague.
Patricia Noonan as Julie Jordan and Aaron Ramey as Billy Bigelow are the innocent girl and carnival barker whose tentative relationship is the hinge upon which their fortunes swing. Their passionate, ill-fated love affair – set against a backdrop of such glorious songs as “If I Loved You,” “You’ll Never Walk Alone” and “June is Bustin’ Out All Over” is the heart of this masterwork, Rodgers & Hammerstein’s personal favorite. Contrasting the two lovers, R & H created the roles of Carrie Pipperidge and Enoch Snow to be the more "normal" couple, leading happy, productive lives with a gaggle of children in contrast to the frustrating relationship of Julie and Billie and their unplanned daughter. 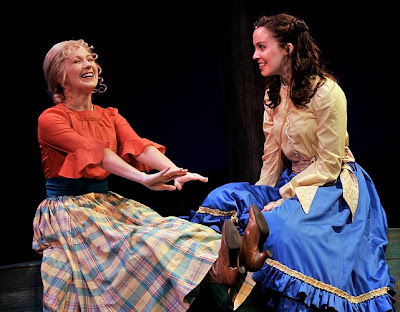 Sara Jean Ford and Patricia Noonan. Kevin Sprague Photo.
Carousel is based on Liliom by Ferenc Molnar, though transferred to the New England seacoast. The musical is considered the first to have blended the dialog and music into a seamless whole, the classic example being the song, "If I Loved You." It was also an early example of how R & H were able to get people who just met to sing love songs to each other through the use of the conditional tense, as in "IF I loved you" . 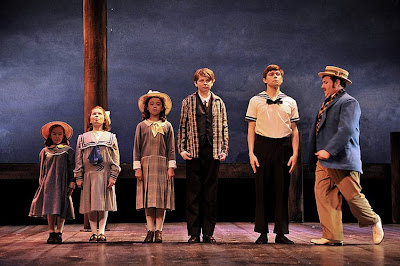 Five of the Snow Drop Kids line up for papa. Kevin Sprague Photo.
Like its original story, Carousel is written with imaginative daring, an uncanny blending of naturalism and fantasy, humor and pathos, tenderness and tragedy into a single dramatic structure. Every dramatic turn is as closely matched to the next as pearls on a string. 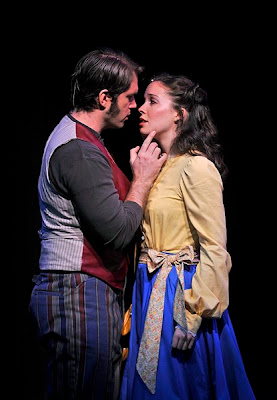 Aaron Ramey and Patricia Noonan play the ill fated lovers. Kevin Sprague photo.
The tragic lives of Billy Bigelow and Julie Jordan should be some sort of lesson in the values of good and evil, but in the end Billy ends up in an act two Heaven that his own imagination dreamed up in act one. The only difference between a bully, one who would hit his own greatest love, and the saint, the one who would allow his children to pick on other innocent children, is the supposed moral superiority society gives the lesser transgressor. 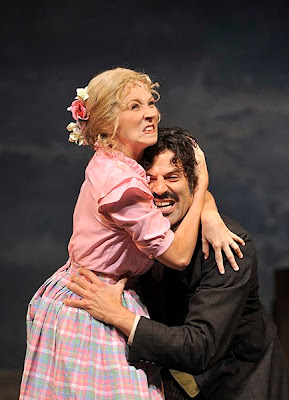 Naughty, naughty. Christopher Innvar tricks Sara Jean Ford into knoodling. Kevin Sprague Photo.
Patricia Noonan and Aaron Ramey had strong pleasing voices (if annoyingly over-amplified, a Barrington tradition) but the surprise singers of the evening were Sara Jean Ford and Todd Buonopane who were simply stunning. Another superb standout was Teri Ralston as Nettie Flowler, owner of the Clam Shack whose authoritative voice dominated the proceedings whenever she was on stage. 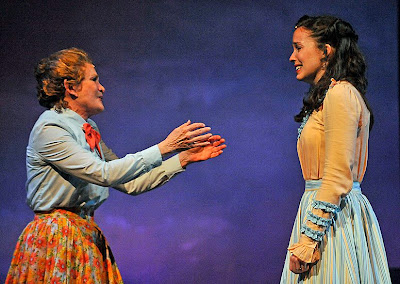 Teri Ralston and Patricia Noonan as Nettie and Julie during a difficult moment. Kevin Sprague Photo.
The direction by Julianne Boyd kept things moving at a fast clip, with scene changes that were close to seamless. The crew on the rigging, however, needs a little more practice to make the rise and fall of drops more organic and less herky-jerky. 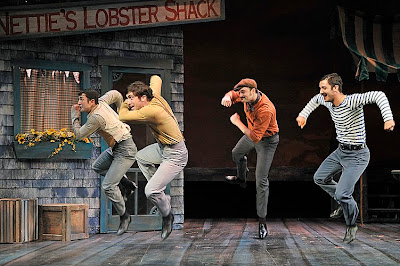 Frisky boys. Al Blackstone, Neil O'Brien, Ronnie Nelson, and Daniel Kermidas. Kevin Sprague Photo.
The music was provided by twin pianos, under music director Darren Cohen. This cut in the pit band was necessitated by budget considerations - 8-12 musicians in the pit can be a very large expense. I am sure this pained Julianne Boyd more than us. Yet with a score as luscious as this one, it was very sorely missed. Maybe it was the constant rain and shifting weather but the two instruments were ever so slightly out of tune with each other. And I mean beyond the usual tinny upper two octaves which are notoriously shrill on upright/spinet pianos. Will some music loving member of the audience please find this wonderful company decent pianos, maybe a baby grand or two? 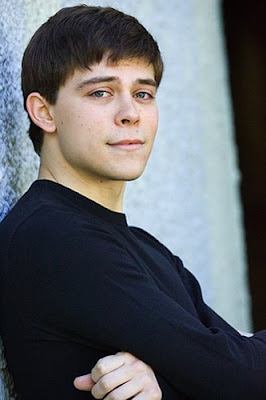 Edmund Bagnell, whose violin playing was the surprise of the evening.
But wait. There's good news here, too. The austerity of the music budget was ameliorated to some degree by the presence of Edmund Bagnell who played Enoch Snow, Jr, and doubled on the violin. For one scene his addition of the live violin raised the music from earth to heaven, and simply delighted many in the audience. During the applause following that scene I heard my neighbors happily commenting on the unexpected addition, and in another we were treated, briefly, to the addition of a couple of rhythm instruments. Very clever. Who knows, if Julianne keeps this up, we may end up with a one of those avant garde musicals in which the actors play all the instruments next season. It's already been done elsewhere with Sweeney Todd and Company. 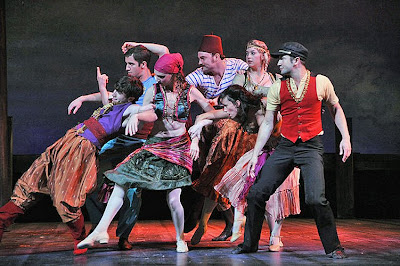 The Company. Kevin Sprague Photo.
One final note. Perhaps, for one performance of these musicals, an unamplified performance could be scheduled so that those of us brought up on acoustic theatre, not amplified, can return to the golden days of the pre-1960's when technique was replaced by technology. It would reveal who the good singers really are, and aren't.

Still, my personal preferences aside, this show gets my recommendation. It is a beautiful production that is well sung, nicely acted, and offers a ballet sequence that will melt even the iciest hearts. The set and costumes are pretty nifty too. Go and enjoy. This is a rare treat. The Company. Kevin Sprague Photo.
Carousel is at Barrington Stage, 30 Union Street, Pittsfield. Showtimes are Tuesday and Wednesday at 7pm, Thursday through Saturday at 8pm, Wednesday and Friday matinees at 2pm, and Sunday at 5pm. As part of its 15th Anniversary Season, BSC makes 15 tickets available for every performance at $15. Tickets can be purchased ahead at the box office, by calling 413-236-8888 or visiting www.barringtonstageco.org.
Posted by Larry Murray at 12:30 PM

Larry, thanks for the kind comments and the thorough review. I think "Carousel" is on its way to be the hit of the summer. The ballet in the second act was so unexpected and beautiful. Really a wonder.