Patti LuPone recently reprimanded yet another inconsiderate audience member publicly, and the discussion has raged on. But this is the best summary of the issue that I have seen. 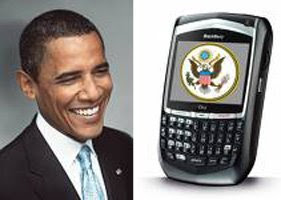 If the President of the United States can manage to make it through a 2-hour theatre-going experience without disturbing his fellow theatregoers with his much-beloved Blackberry, then *anyone* should be able to do the same.

That said, it should have been the house management enforcing the ban. That same blue light that annoys nearby patrons should be readily visible to any relatively attentive ushers.

In the Berkshires, this is not much of a problem since people seem to be a bit more civilized, and the volunteer ushers are sitting right there, with the audience.
Posted by Larry Murray at 6:35 PM