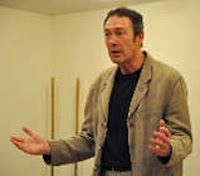 Actor Colin Lane in rehearsal at BTF.
Resist the impulse to pass on Faith Healer, just go! Sure, the thought of three actors, each on stage for extended soliloquies, sounds like a pretty chancy way to spend an evening at the theatre, but you just have to trust the playwright. Read all about the show in this full review at Berkshire Fine Arts.

Every word, every phrase, every movement is calculated to reach inside you and make you feel alive, to care for these characters, a preacher-healer, his wife (or is she his mistress?) and his manager. An unlikely trio of pals, but in the end, they are each others lives. Frank Hardy, the preacher, is a showman at heart, full of jocularity and bravado that is but a front for his feelings of humiliation and loss. His wife, Grace, lurches between resentment and wonder, and the manager tells the truth about the pair. Or does he? In the end, the play is more than a sum of its players, it stays with you. And resonates.

Ralph Fiennes undertook Faith Healer on Broadway a few years ago, and won many doubters over to the brilliance of Brian Friel's simple play.