"Bad Dates" Travels to Merrimack Repertory Theatre for a Month 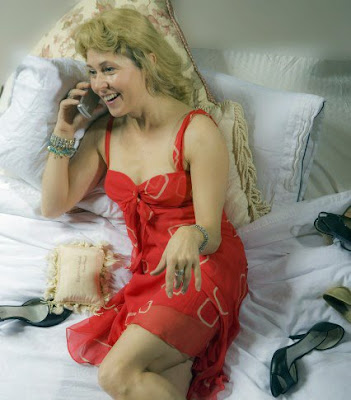 Watch out Lowell - the play may revolve around all her bad dates, but this delightful show is an evening out that will make the boys laugh as much as the girls. They may even catch a few clues! Elizabeth Aspenlieder is about to move in on the Merrimack scene, and she is telling all. Her one woman show, Bad Dates has warmed up the Berkshire's normally frigid winter theatre scene with sell out performances for two months. At yesterday's press conference announcing the 2009-10 season for Shakespeare & Company everyone was delighted to learn that her triumphant one-woman show was getting a run of its own within driving distance of Boston. Now you can see what all the excitement has been about.

The hilariious Theresa Reebock play has its final Lenox performance on March 8, and then Aspenlieder moves to the Merrimack Repertory Theatre from March 19 to April 12 to recreate the role. You can also read a review in Berkshire Fine Arts.

A hilarious and touching comedy. A single mother with a teenage daughter, a screamingly stressful job, and a collection of 600 pairs of shoes, Haley Walker tries to find love in the big city. Relive her rotten romances as Tibetan Buddhists and even the Romanian mob get in the way of her finding “Mr. Right.” Her story is a love and fashion odyssey that has had audiences across the country rolling in the aisles! 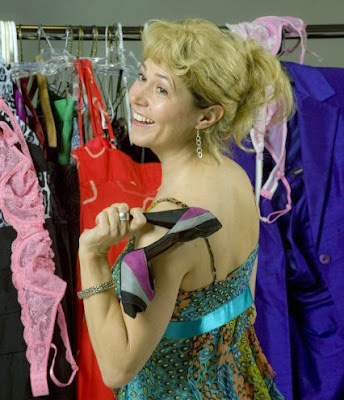 "Do you think this pair matches?"

For the actress the only question remaining is which shoes to take.

Key Info: Merrimack Repertory Theatre has online ticket ordering and is centrally located at the convergence of Routes 3, 93 and 495 in the heart of historic downtown Lowell. If you live in the Boston area, you are probably less than 30 minutes away from what people say is “the best kept secret of the Merrimack Valley.” Merrimack Rep is professional theatre at affordable prices and without the hassle of traffic and parking. For more information you can call them at 978-654-4678.
Posted by Larry Murray at 4:31 PM