Just in: the first review I have seen and it's a gem! Check out Life's A Pitch 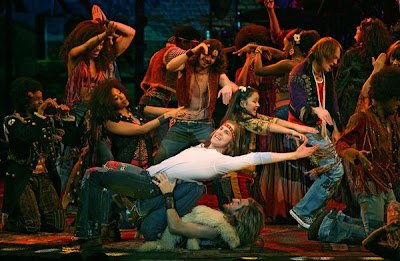 Gavin Creel as Claude (center) and the cast of the Broadway revival of HAIR: The American Tribal Love-Rock Musical directed by Diane Paulus and choreographed by Karole Armitage. HAIR features a book and lyrics by Gerome Ragni and James Rado and music by Galt MacDermot. Al Hirschfeld Theatre (302 West 45th Street, NYC). All photos by Joan Marcus.

At the dawning of a new age in America, HAIR: The American Tribal Love-Rock Musical returns to Broadway for the first time in over 30 years. cultural icon is a legendary show which changed Broadway musical theatre. This fresh new version of the counter-culture musical started its second journey to Broadway last summer in Central Park. There the Public Theatre presented it with Jonathan Groff, of Spring Awakening fame. Though he is not in the revival due to other commitments, but word is that the entire cast is first rate. 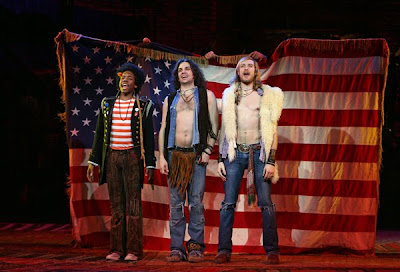 Assuming good reviews when it opens Tuesday at the Al Hirschfeld Theatre on 45th Street, tickets will become hard to get, especially at a discount, but here's a great deal. You can buy $112-122 Orchestra/Mezzanine seats for only $60 for the Tuesday to Friday performances, or Sunday evening. For the Saturday Matinee and Evening, and Sunday Matinee, they are $75.00 Jot down the code "HANYTW4" and call 212-947-8844 or go to www.broadwayoffers.com and enter the code when prompted. Currently, this offer is valid on all performances through May 10, 2009. 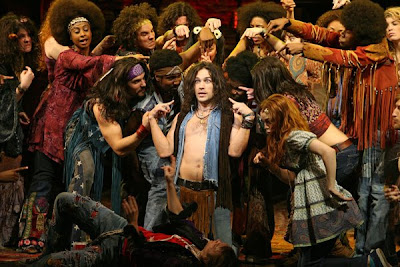 Will Swenson as Berger and the cast of the Broadway revival of Hair.

A celebration of life, a love letter to freedom, and a passionate cry for hope and change, Hair features some of the greatest songs ever written for the stage, including "Let the Sun Shine In," "Easy To Be Hard," "Good Morning, Starshine," "The Age Of Aquarius" and the rousing title song. Welcome to the curly, shaggy, gleaming, streaming, wonderful world of Hair! 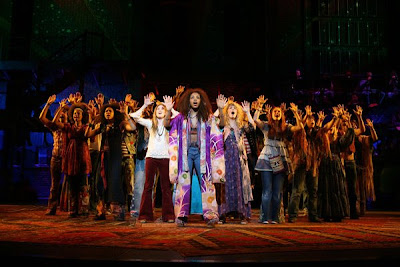 Tommar Wilson, Will Swenson as Berger and Bryce Ryness as Woof in the Broadway revival of Hair.

Directed by Diane Paulus and choreographed by Karole Armitage, Hair features a book and lyrics by Gerome Ragni and James Rado and music by Galt MacDermot. 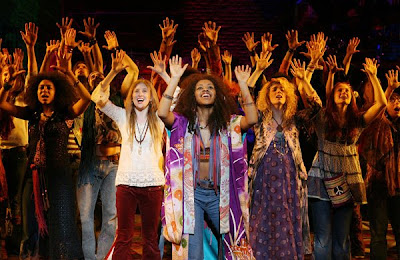 Sasha Allen as Dionne (center) and the cast of the Broadway revival of HAIR. Photo Joan Marcus.