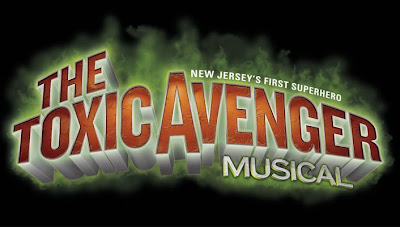 "Better then Cats!"
I envy those of you who are in the NYC area, you can quickly get to the New World Stages on 50th Street to check out the hot new musical, The Toxic Avenger, directed by the immensely gifted Tony winner John Rando who has been lent to you by the Berkshires. Rando directed a hilariously funny A Flea in Her Ear at the Williamstown Theatre Festival last summer and we want you back ASAP. (Read my story on John and French Farce for some insights into his genius.)

So what's the big deal? Well unless you have been in solitary, you must know that The Toxic Avenger is a 1985 classic cult movie, and has spawned several sequals. Now it is a hot new rock musical with music and lyrics by David Bryan - keyboardist and founding member of Bon Jovi. For show mavens, the book and more lyrics are by Joe DiPietro (I Love You, You're Perfect, Now Change). 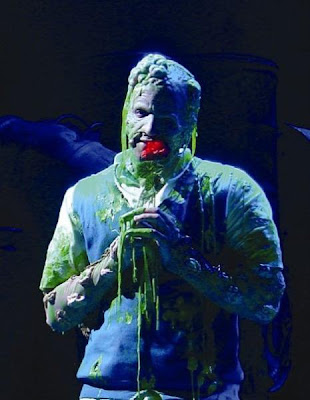 Nick Cordero as Toxie
Photographed by Kelly Ryman
He’s New Jersey‘s first Superhero and he takes to the stage in this rock ‘n roll monster of a comedy. Thrown into a vat of toxic goo by two bullies, a mild-mannered science student named Melvin Ferd the Third is reborn as a one-of-a-kind environmental crusader, The Toxic Avenger! Armed with superhuman strength and a heart as big as Newark, he’s out to save New Jersey, end global warming and woo the prettiest, blindest librarian in town. He’ll leave you laughing in the aisles as he rocks the house and saves the earth for all of mankind. 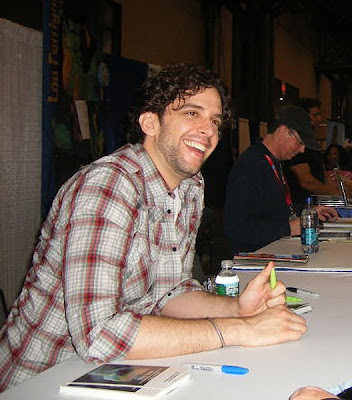 Nick Cordero who plays Toxie greets the fans.
My spy in Queens tells me the show is fabulous, though in previews, and destined for great things. These days there are two kinds of musicals, one for older audiences, and one for younger crowds. The best summary is this one:

The Toxic Avenger is appropriate for audiences from 13 to 100+, although over 100, we're not responsible for death due to laughter. The show contains a monster that might frighten young children, and it also contains some words our mothers said we shouldn't use. If it was a movie, it'd be rated PG-13… but it’s not a movie. Children under the age of 4 are not permitted in the theatre.

And finally, want to have some fun? Go to the Toxic Avenger Interactive Street Scene and poke around.It will take a few seconds to start loading. High speed connection is best. Have fun at home, then go see this show in New York, or near you when your local theatre company gets permission to perform it. It is truly a musical for everyone!
Posted by Larry Murray at 3:57 PM

I saw this show when it debuted at the George Street Playhouse in New Brunswick NJ and I am thrilled to be going to see it again in NYC on Apr. 4th. It's 90 minutes on constant laughter. Them music and lyrics which by the way were writted by David BryAn(not Bryon) are just fantastic. Go see it, you wont be disappointed.
rutpop