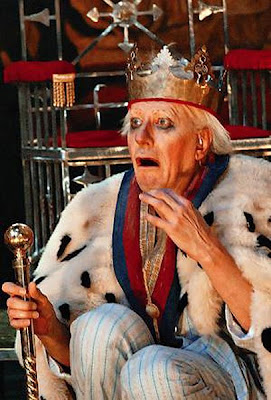 Coinciding with the 100th anniversary of Eugène Ionesco's birth his absurdist comedy, Exit the King will arrive on Broadway for a four month run starting next Saturday and play through mid June. And this is not just any production, but the most celebrated staging in memory, from Australia of all places.

The play was originally written by Eugène Ionesco in 1962, and this noteworthy edition is the result of a successful collaboration between two Oz theatre companies. Freshly translated by Geoffrey Rush and director Neil Armfield and premiered at Melbourne's Malthouse Theatre in 2007 it was immediately followed with a Sydney run with Company B. These engagements were critical successes, audience pleasers and sell outs, the trifecta of theatre.

The always charming Rush, who will be making his Broadway debut, gushed: "Taking this theatrical work to the thrilling world of commercial Broadway is an exciting and thrilling treat." He will be reprising his role as the absurd King Berenger. Rush will be joined by fellow Oscar winner Susan Sarandon, as the strong and spiteful Queen Marguerite.

The play's plot line is simple. King Berenger is getting old – 400 years old, to be exact – and his health is failing. His country is failing (his empire is down to six people). His marriage is failing (his first marriage already failed). But his pride has most definitely not failed, and despite being told his time is up, the ancient ruler refuses to get off the stage without a fight. 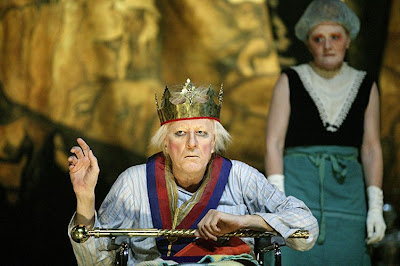 Photo from the original Australian production.

Having surrendered to the whacked out mind of Ionesco decades ago, this is a play that could easily cause fans like me to open their wallet in order to secure the absolutely best seats possible. However, some research uncovered a wonderful discount offer, and it will save us about 40%.

You can order these tickets through BroadwayOffers.com or by phone to 212-947-8844. The code to use is EKTW225. Previews begin March 7 and opening night is March 26.

Exit the King is a distinctive and exciting piece of theatre, and could well start a trend of importing Australian theatre to Broadway in addition to the frequent arrivals from London's West End.
Posted by Larry Murray at 7:45 PM