Chad Allen's "On the Other Hand, Death" a breakthrough film 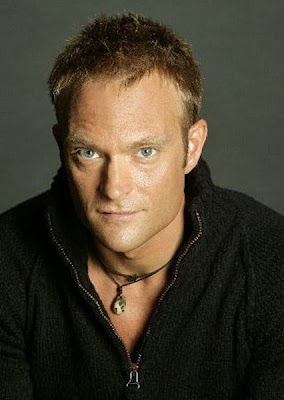 Actor Chad Allen's career has been on the ascent recently, and we intruded into some of his rare time off to catch up with his activities. Having just arrived home in California after months away, he was in great spirits, playing with his dog and finally getting to enjoy his new house.

"It is so wonderful to be home again, I can't tell you how much I missed my partner and being able to just fix a snack." Chad, who is openly gay, is in the fourth year of a very happy relationship, and excused himself for a moment to see if his mate (who had received a notice earlier) would actually have to serve on a jury. "Sorry but I was worried. I have a lot of catching up to do. Now that I'm back I don't want to have to share him with twelve strangers," he joked. 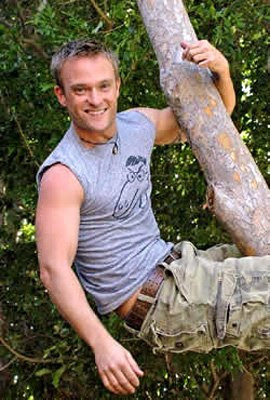 Chad Allen hanging out at home.

Chad and his partner, also an actor, live basic, uncomplicated lives, and for all the attention he gets, he far prefers his bicycle and open air to a limousine and the red carpet. Their idea of fun is a hike in the Santa Monica Mountains. "There are some amazing trails up there, and my dog - partly Korean Jindo and partly Akita - just loves it. We both get to release a huge amount of pent up energy."

Of course it is amazing that he has any energy left. Chad is a triple threat actor - meaning he does acting in all its forms - stage, film and tv. On the Other Hand Death, the latest in his series of Donald Strachey Mystery films is due out on DVD February 24. It is the third in a six-part series he is committed to. Allen plays a gay private investigator and the movie co-stars screen legend Margot Kidder (Superman). Directed by Emmy® award nominated Ron Oliver (“Degrassi: The Next Generation,” “Queer as Folk”) On the Other Hand, Death delves into gay hate crimes and the difficulties faced by the LGBT community. So far, four episodes have been filmed in Vancouver, with two more still due. The fourth installment in the franchise is titled Ice Blues is scheduled for release in the fall and co-stars Sherry Miller who was also in Queer as Folk. 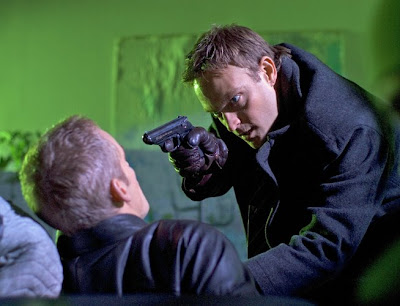 Asked to give a plot synopsis, he said: "It begins with Dorothy (Kidder) and Edith (Gabrielle Rose) sleeping in each other’s arms on the second floor of their long-time farmhouse. Downstairs, a shadowy figure breaks through the glass door. When Edith goes to investigate the noise, she discovers graffiti sprawled across the walls. The hateful message reads “DYKES GO HOME.” 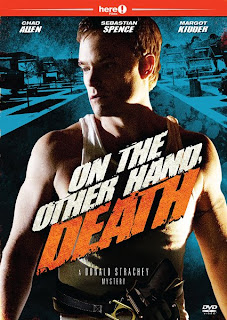 As with all the Strachey films, On the Other Hand, Death premiered on gay cable network here! TV July 25, 2008.

I mentioned that the first two Strachey films seemed more made for tv than his latest, that his character of Donald seems to have evolved and deepened. "When we first started the series, we had a limited amount of time to shoot, and not a lot of time for development. So I am glad you think that my character is becoming more complex." I noted that he has an on-screen lover, too. "I love the relationship between the character Tim played by Sebastian Spence and myself in the series. That too has deepened as the series has matured." The film also has a film noir style, with some shaken, not stirred, James Bond references. It is fun to see the mini-tributes to adventure films scattered throughout the story. 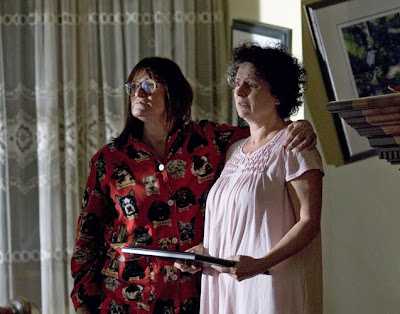 One of the delightful pairings in the film is Strachey's sidekick, Kenny Kwon - played hilariously by Nelson Wong - who finally gets a chance to do some real detective footwork. "You know, that's funny, because his part was deliberately added in to the third film since his role worked so well the last time." Will we see more of him in the future?" I wondered. "Well, episodes five and six have not yet been written, so who knows. I'd love to see him as a recurring character." Me too. The two played off each other very nicely. 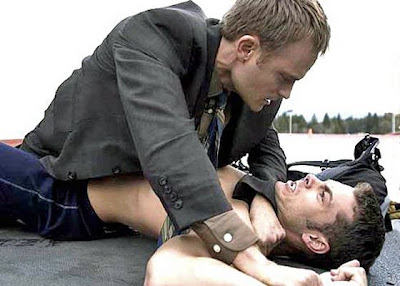 Det. Donald Strachey (Chad Allen) gets rough with Larry (Shawn Roberts) in "A Shock to the System"

We talked about the setting for the film, Albany, New York, and whether there had been any discussion about shooting the series there rather than simply using some static "establishing shots" as fill-in. "I would love to see it filmed on location," he enthused, "and we came close once, when the Canadian-US dollar ratio was more favorable." I suggested that with the Berkshires so close, he would be within striking distance of some great hiking and scenery, plus four resident professional theatre companies. 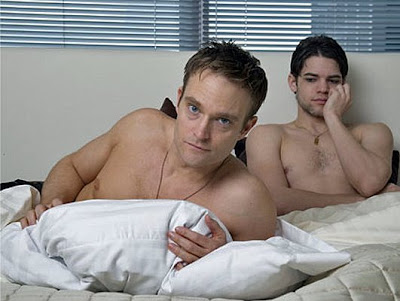 "The closest I have ever gotten is TheatreWorks in Hartford where I was performing The Little Dog Laughed early last year. But to tell the truth, I love going to Vancouver, too." 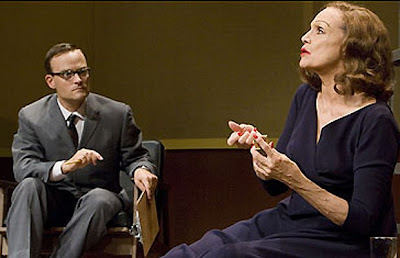 The conversation turned to his current stage work in the play Looped in which he co-stars with Valerie Harper as the legendary Tallulah Bankhead. It kept him in Palm Beach during early 2009, and will continue in Washington, DC at Arena Stage in May and June. Arena Stage currently has two of its productions going to Broadway (Next to Normal and 33 variations) , and there is talk of Looped heading to Broadway as well. Chad and I hope to talk about that in a few months when we meet up in DC.

Berkshire note: Looped is directed by Rob Ruggiero (Make Me a Song: The Music of William Finn and The Dog Who Talked at TheatreWorks).  Rob is well known here in the Berkshires having worked frequently with Julie Boyd's Barrington Stage Company. Chad clued me in: "I just love working with Rob, he is just a fantastic director. More than that, he's a wonderful person, one who I have come to appreciate as an artist and a friend." Ruggiero often directs at TheatreWorks in Hartford, and we are thinking of adding that innovative company to our regular beat for Berkshire Fine Arts. Ruggiero also has a revival of the musical Camelot in the works, slated for late summer at The Goodspeed Opera House in East Haddam, Connecticut. 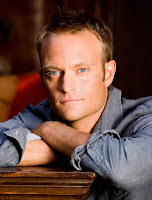 Chad Allen has had several careers already, and seems about to make yet another breakthrough. His earliest work on television was when he was 11 on Webster, Our House, My Two Dads and St. Elsewhere. (1985-1990) He stopped acting and went to a real high school, facing plenty of slings and arrows along the way, and surviving. It was perhaps because of this break that he never became consigned to that dreaded lot in life of being a teen idol. His Tiger Beat exposure was all when he was a pre-pubescent star.

Returning to tv, he became well known on Dr. Quinn, Medicine Woman, which kept him busy for six seasons from 1993-97.

In 2001 he appeared in Corpus Christi, Terrence McCNally's story of a gay Texas boy considered by many critics to be a stand-in for Jesus. Chad produced and starred in the Los Angeles premiere of this controversial show.

And so, in the October 9, 2001 issue of The Advocate, Chad came out as a gay man. He also acknowledged past problems with drugs and alcohol.  One of the most impressive things about him is that he has dealt with each issue simply and honestly. This quality also comes through in his acting, there is a Nicholson quality to it. His acting is so honest that his role of Donald Strachey does not come through as an actor's creation, but simply as another extension of an already diverse and interesting career. Chad is Donald and Donald is Chad. The role and the actor have melded into one organic whole. Only the best actors can do that. 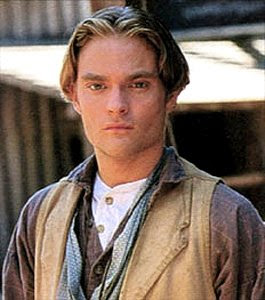 Since that announcement,  his personal development has accelerated,  his acting career blossomed, and his home life greatly enriched with a loving relationship. He is not only known for being out and gay, but also for being Christian and gay. Indeed, he has taken principled stands as part of Soulforce, taking part in a demonstration outside the Focus on the Family headquarters in Colorado Springs. One of his most deeply held hopes is a reconciliation between Christians and gays, that the two are not mutually exclusive. To this end, he produced and starred in another film, Save Me, about the ex-gay movement which I wrote about last month. It is a tough film for the two polarized sides of the God-Gay continuum to see, but it attempts to build a bridge of understanding between the two camps. As such, it is a breakthrough film.

Clearly, Chad Allen is no simple actor, but a complicated guy just trying to find and keep his voice, Hollywood machinery be damned. Early in his career some well meaning studio types tried to remake him: "There was a time when it was actually said to me, “You know, we can get you a girlfriend. We can make that happen.” But that's not in me. I can't live a lie."

I commented that he seemed to have survived the transition from the closet to a fully out actor. "It's no big deal," he said, "you just keep doing the same things you always did, only they pay you less for it."
Posted by Larry Murray at 12:59 PM

I know I'm very late to the party (by years!), but this was an excellent interview.