Chad Allen on "Save Me" DVD and in Person in "Looped" 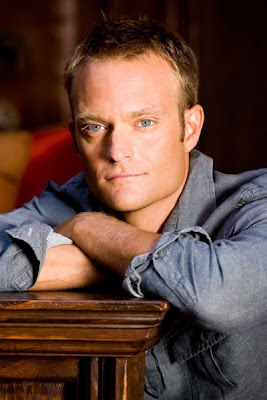 The versatile Chad has been acting since he was five.

Chad Allen's film "Save Me" was released on DVD yesterday, while Washington, DC's Arena Theatre has confirmed that he will co-star with Valerie Harper in Looped. On its way to Broadway, Looped is the story of Tallulah Bankhead, the original celebrity bad girl, which begins as she enters a studio to re-record (or "loop") one line of dialogue for her final film. What ensues is a showdown between an uptight sound editor and the outrageous legend. 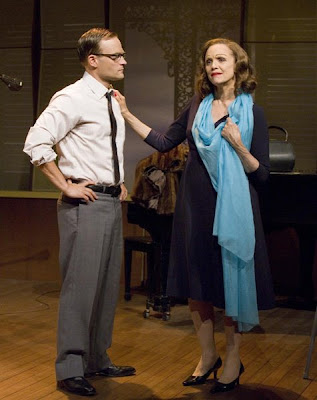 Four time Emmy winner Valerie Harper plays Talllulah, to Chad Allen's soundman in Matthew Lombardo's riveting new play. It is slated for May 29 through June 28, 2009 at Arena Stage's Lincoln Theatre. We will write more about this production closer to the opening. 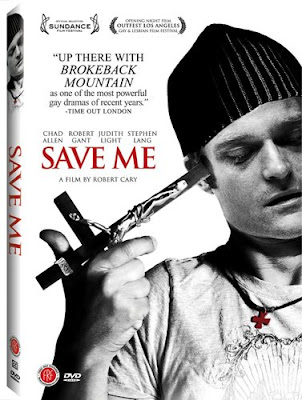 Save Me comes to DVD at last.

Meanwhile, Allen's "Save Me" which had its premiere at Sundance in 2007 has finally made it to DVD. Save Me is a deft exploration of the controversial ex-gay movement. The story follows Mark (Chad Allen), a drug-addicted young man who overdoses and finds himself at the mercy of his disapproving family.

Their solution to Mark's problems is to check him into a Christian run ministry overseen by Gayle (Judith Light), who believes she can help cure young men of their 'gay affliction' through spiritual guidance. At first, Mark resists the efforts of Gayle and her husband Ted (Stephen Lang), but soon finds solace and brotherhood with several of the members, including Scott (Robert Gant), who is battling family demons of his own. 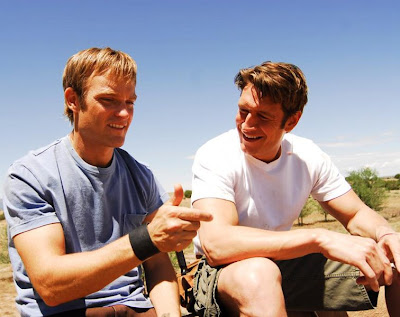 Chad Allen and Robert Gant in Save Me.

When Mark and Scott begin to find their friendship developing into an unexpected romance, both are forced to confront the new attitudes they're beginning to accept, and Gayle finds the values she holds as an absolute truth to be threatened.

Directed by Robert Cary, from a screenplay by Robert Desiderio, Save Me is a love story that offers a complex and timely examination of one of the most polarizing religious and sexual debates in America, while intricately showing the way love (for oneself, most importantly) can heal in all its various forms.

I just checked, and it is now available at Netflix.
Posted by Larry Murray at 3:21 PM