Finally the Truth: Inauguration Quartet was Faking It 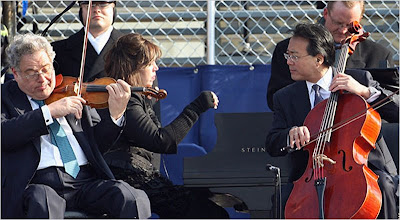 When Yo Yo Ma, Itzhak Perlman, Gabriela Montero and Anthony McGill began playing "Air and Simple Gifts" it was clear that this was a fake performance - the sync of the vibrato and rubato were off. From the sham "piece written for the occasion by John Williams" which was more like a copied and cribbed version of the Aaron Copland ballet, Appalachian Spring, to the quartet itself, it was all fake and phony.

Turns out that all the intense feelings on the faces of the players was nothing more than acting. The inner workings of the piano had been disassembled, and Yo Yo Ma had silenced his cello by putting soap on the hairs of his bow. All of this trickery is detailed in an article by Eric Felten in the Wall Streeet Journal.

"They were forced to perform to tape because of the weather" said Carole Florman, a spokeswoman for the Joint Congressional Committee on Inaugural Ceremonies. Yet the Marine Band and chorus that performed that day played without needing a recorded backup. The quartet had recorded the music the previous Sunday at the Marine Barracks in Washington, and those who run these kinds of events would have you think it was used as a "last resort". The players weren't exactly lip synching, but timed their bowing, blowing and pounding to complete the effect. 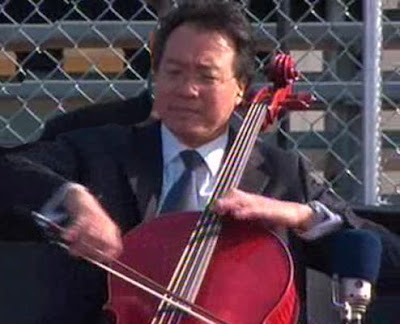 Yo Yo Ma put soap on the hairs of his bow to make sure no sound at all came from his "pretend" playing.

Now, having played a violin outdoors a few times myself, I know how quickly strings can go sour under such conditions. Then there is the huge disappointment I felt when after hearing that John Williams had composed something for the inauguration, and expecting perhaps something like Fanfare for the Common Man we get a rehash of a rehash. After all, even Aaron Copland had cribbed his melody from an old Shaker hymn.

What we were left with was fakery, and I guess, a nod to classical music. But even CNN decided to talk over the performance, philistines that they are. Or maybe they knew it was not real music.

The arts community is in the midst of a major campaign to have a Cabinet Secretary of the Arts.

Are you kidding me?

Keep politics out of the arts. All it does is encourage mediocrity.

if you are curious as to what kind of music the new President really enjoys, and live music does seem to be in favor, you can read all about what music he and Michelle danced to on Inauguration Night, and employed around the city before and after his big day.