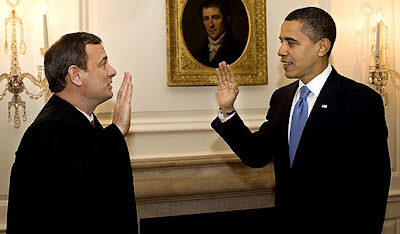 All the world's a stage,
And all the men and women merely players:
They have their exits and their entrances;
And one man in his time plays many parts

...and it might also be said that they occasionally blow their lines, as President-elect Obama and Chief Justice Roberts did at the inauguration ceremony."Take One" was anything but flawless, they both stumbled over their script.

In the first go-around, Chief Justice John Roberts botched the wording, deviating from the language in the Constitution. Following along, Obama repeated the mistake.

The New York Times had fund with this, speculating: "How could a famous stickler for grammar have bungled that 35-word passage, among the best-known words in the Constitution? Conspiracy theorists and connoisseurs of Freudian slips have surmised that it was unconscious retaliation for Senator Obama’s vote against the chief justice’s confirmation in 2005. But a simpler explanation is that the wayward adverb in the passage is blowback from Chief Justice Roberts’s habit of grammatical niggling." 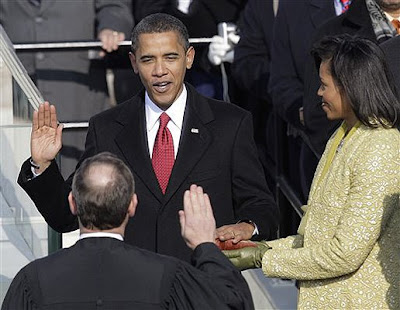 Take One
"Out of an abundance of caution," White House Counsel Greg Craig said in a statement, Obama decided to retake the oath Wednesday.

The world of politics is such that some evil soul somewhere would challenge the legitimacy of the inauguration. So Chief Justice John Roberts, black robe in hand, was ushered into the Map Room at the White House Wednesday night to re-administer the oath of office to President Barack Obama. All because one word was out of sequence.