Goodman's Desire Under the Elms Extended to March 1 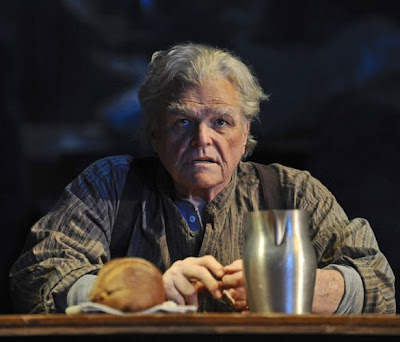 The brilliant actor Brian Dennahy is commanding in Desire Under The Elms at Chicago's Goodman Theatre. Photo by Liz Lauren

Eugene O'Neill's masterpiece, Desire Under the Elms has never been more overtly sensual and provocative as in the hands of the Goodman's Artistic Director Robert Falls. The reviews have been sensational, and demand for tickets so great that the show has been extended to March 1. However, Carla Gugino's schedule does not allow her to stay with the production, so after February 17 her role will be played by her understudy, Amy J. Carle. Gugino departs the production to fulfill press commitments for the releases of her films Watchmen and Race to Witch Mountain, both opening in early March. 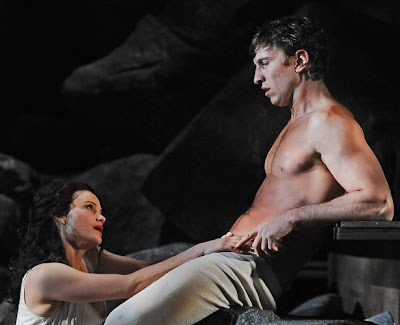 Brian Dennehy has appeared often at the Goodman. (Death of a Salesman, Long Day's Journey Into Night) Pablo Schreiber is another veteran Goodman regular (Vicky Cristina Barcelona, Awake and Sing!), as is Boris McGiver (The Wire). Daniel Stewart Sherman rounds out the cast and was recently seen in Broadway's Cyrano de Bergerac. 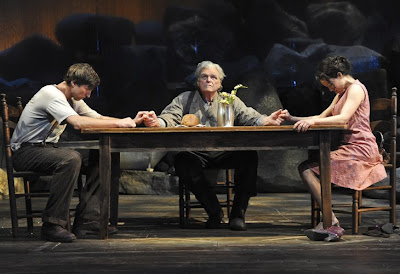 Desire Under the Elms is the centerpiece of the Goodman's landmark theatrical event, "A Global Exploration: Eugene O'Neill in the 21st Century," Desire Under the Elms has been hailed by critics as "enormous, powerful" (Chicago Tribune), "blistering [and] bold" (Chicago Sun-Times). Performances are scheduled through March 1 in the Goodman's 856-seat Albert Ivar Theatre.

Dennehy and Falls, O'Neill and the Goodman are entwined.

Over the past 20 years at the Goodman, Brian Dennehy has delivered towering performances in four O’Neill works, each directed by Robert Falls. The first collaboration was The Iceman Cometh (1990), the epic portrait of hope and disillusionment with Dennehy starring as hardware salesman and pipedream-buster Theodore “Hickey” Hickman—with a cast that included Hope Davis, Denis O’Hare, Ernest Perry, Jr. and James Cromwell.

The production was named by Time and USA Today one of the 10 best American theater productions of the 1991/1992 season and was subsequently hailed as the highpoint of the 33rd annual Dublin Theatre Festival. 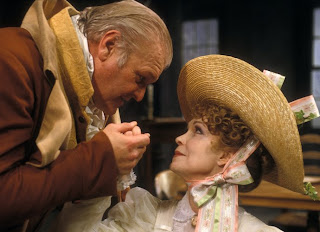 Pictured in Robert Falls' 1996 production of A Touch of the Poet by Eugene O'Neill are Brian Dennehy (Con Melody) and Deanna Dunagan (Deborah Harford). Photo by Eric Y. Exit.

In 1996, Falls and Dennehy returned to O’Neill—this time with the 1936 tale of tragic self-delusion, A Touch of the Poet, featuring Dennehy as the tyrannical Con Melody, Pamela Payton-Wright as his long-suffering wife, and Jenny Bacon as his rebellious daughter. 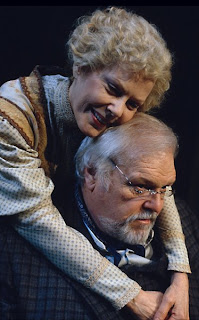 Six years later in 2002, O’Neill’s masterpiece, Long Day’s Journey Into Night, arrived on the Goodman stage with Dennehy as the vain, selfish patriarch James Tyrone. The Broadway remount of the production two years later—featuring Dennehy, Vanessa Redgrave, Phillip Seymour Hoffman and Robert Sean Leonard—won the Tony Award for Best Revival of a Play, with Dennehy and Redgrave each earning the prizes for Best Actor and Actress. 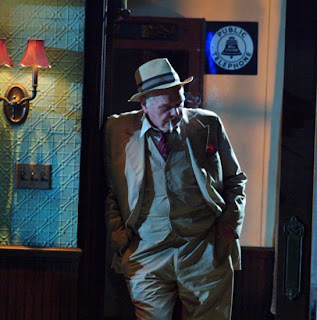 Most recently, in 2004, Falls staged Hughie, the posthumously published one-act, with Dennehy as the big-time talker and small-time gambler Erie Smith—a production for which director and actor reunited at Canada’s Stratford Shakespeare Festival, June 18 – August 31, with a subsequent production at Long Wharf Theatre. Desire Under the Elms marks their fifth collaboration on the works of O’Neill.
Posted by Larry Murray at 3:08 PM