Mabou Mines and their Eccentric DollHouse 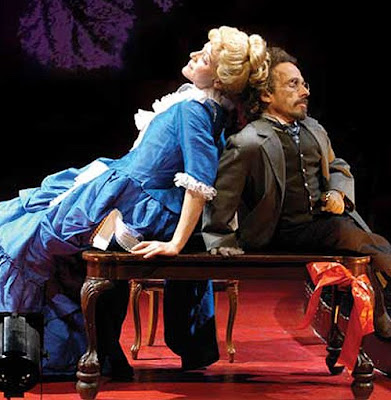 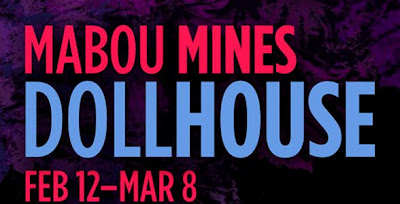 When I search through theater offerings for new and fresh approaches to familiar old classics, one in a while a gem pops out. This is one of them - you have never seen a DollHouse like this one, everything from cast to scenery is freshly imagined.

Director Lee Breuer turns Ibsen's mythic feminist anthem on its head by turning the equation of power and scale upside down. The male characters are played by very short actors whose heights range from 40 to 53 inches, and the women by actors almost 6 feet tall. Nothing dramatizes Ibsen's patriarchal point more clearly than the image of these little men dominating and commanding women one and a half times their size. And the women dwarf the tiny set.

This production started in New York some time ago, and returns for its final performances from now to March 8, 2009 after playing thirty cities around the world. With their adaptation of A Doll's House, Obie Award Winners Lee Breuer (Best Direction) and Maude Mitchell (Best Actress) transform Ibsen's bourgeois tragedy into high comedy with a deep bite.

You can sample some of the production in the video below:

Playing at St. Ann’s Warehouse located at 38 Water Streeet in the dumbo section of Brooklyn. Their Box Office (718.254.8779) is open Tues-Sat 1PM-7PM for advance telephone purchases and 1PM-three hours before showtime while performances are running.

St. Ann's Warehouse has a Spring Series offer which provides discounts. Included in this package is the equally unusual Disfarmer, about a reclusive Arkansas portrait photographer whose life is replicated by Bunraku style Japanese puppets. Disfarmer employed subtractive lighting techniques that inused his simple earthy images with charm and retinal delight. His life is portrayed as simply as his work.
Posted by Larry Murray at 8:45 AM