The Mikado and Royal Court to travel from Cohoes, NY to Pittsfield, MA 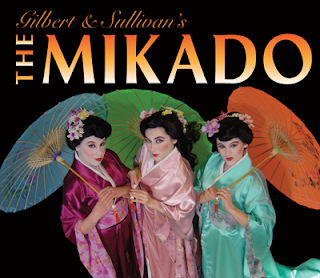 The Mikado is a sparkling and lavish comedic operetta written by Gilbert & Sullivan at the height of their creative genius. Yum-Yum, Nanki-Poo and other charming and absurd characters will amuse and entertain both long time fans and first time explorers of this Victorian forerunner to musical comedies.

The Mikado tells a tale of preposterous carryings on in the mythical Japanese village of Titi-pu. A Japanese prince will do just about anything to win the hand of the national executioner's daughter, for she is his one true love. Over a century later, the themes of The Mikado still resonate with modern audiences with references used in films and television from "Chariots of Fire" to "The Chipmunks". The ultimate classic love story set in the most famous Savoy Opera continues to captivate audiences.

This is the Hill Country's own production, initially mounted in Cohoes, New York at their Victorian Music Hall by C-R Productions and then moved, cast, sets and orchestra to Pittsfield where Berkshire audiences can easily enjoy it. If this is half as good as their sell out production of The Producers last year which played the Colonial under similar arrangements, then we are all in for a real treat, especially if the company's legendary Jim Charles plays The Lord High Exectioner in full over-the-top costume.

Before there was Saturday Night Live, there was Gilbert and Sullivan spoofing the norms and conventions of the time, and drawing other countries and cultures in caricature. Considering the size of this production, the ticket prices are very reasonable.

AT THE COHOES MUSIC HALL IN COHOES, NY:

AT THE COLONIAL THEATRE IN PITTSFIELD: