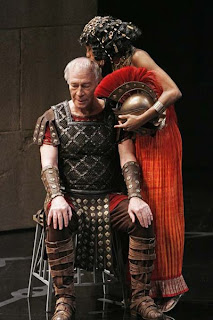 From the National Post in Canada comes word that the Stratford Festival came up $2.6 million short in 2008, and that a request for a government bailout is in the works.

The blame is put on dwindling sales of tickets to Americans:

“I think we were poised to have an extremely good year … We had Christopher Plummer and Brian Dennehy … My sense is that if this had been a normal year, we would have done extremely well,” said Antoni Cimolino, the company’s general director, in an interview yesterday. “We’ve never had better press in terms of the reviews, especially in the United States. It’s especially hard to watch the American attendance drop in a year when we got such great attention in the United States.”

But perhaps part of their problem is that their "press" coverage is not well targeted. When I contacted Richard Kornberg, Stratford's American press rep to inquire about covering Stratford for Berkshire Fine Arts, i was given a politely worded but transparently oozy turndown that was akin to disposing of of a wet kleenex into the trash. They could hardly be bothered with such minor annoyances as an online digital magazine, or (gasp!) a blog like this which recently covered the International Shakespeare Conference. . After telling Kronberg that I was quite flexible on dates, he informed me that to give out comps to reviewers means sacrificing the sale of those same tickets. I let the matter drop.

With this news of scads of unsold tickets, I don't think I believe you, Mr. Kornberg.

But good luck with your problem. We tried to help spread the word to our ticket buying-readers. There is not much more we can do. Besides, we still haven't been added to their press list to get the news releases after two requests. The problem seems to be one of their own making.
Posted by Larry Murray at 2:09 PM