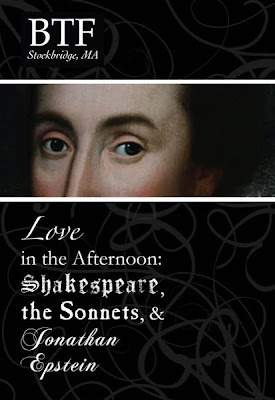 Describing the event, Maguire said “Epstein will engage the audience, working through the identities, histories, and complicated relationship of The Dark Lady and The Young Man, while providing background on Shakespeare and the Elizabethan world. This isn’t your typical one-man performance; it is truly an actor’s look at Shakespeare’s life and writings - a performance of history by an accomplished actor.” 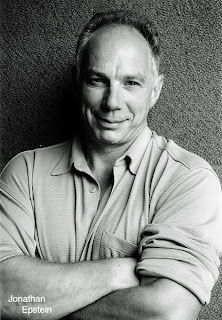 BTF Actor Jonathan Epsein
Epstein has many Shakespearean credentials on his resume. He was a principal actor, teacher and director with Shakespeare & Company, where his roles included Benedick, Puck, Bottom, Dogberry, Feste, Richard III, Iago, Macbeth, Lear, and scores of others. He is the host of Boston's Annual Sonnet Marathon and is much in demand as a guest lecturer on Shakespeare and the Sonnets at universities and theatre companies across the country.

Epstein most recently appeared at BTF as Davies in last season’s The Caretaker. Earlier he was Randall McMurphy in One Flew Over the Cuckoo's Nest, Frank in Educating Rita, Salieri in Amadeus, and David Hare in Via Dolorosa. He is a master teacher of the BTF Apprentice Company. Additionally, he has performed on and Off-Broadway, in London's West End as Goethe's Faust, and in dozens of regional theatres. Epstein has been awarded Boston’s Eliot Norton Award for Outstanding Actor twice.

Epstein is currently performing the role of Max Kellerman in the Pre-Broadway National Tour of Dirty Dancing, now in Boston, moving to LA in May.

Epstein's single performance of Love in the Afternoon – Shakespeare’s Sonnets and the Story Behind Them is slated for BTF's Unicorn Theatre on April 26th 2009 at 2:00pm. The performance will be followed by a discussion with Mr. Epstein, and a post-show reception. Tickets are $50 and available by calling the Berkshire Theatre Festival Box Office at 413-298-5576.
Posted by Larry Murray at 10:38 AM

nice blog, tks for all the infos!!!