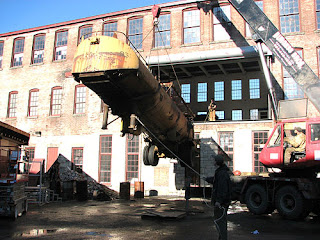 It's been nine months of uncertainty but finally the spendthrift Christoph Buchel is about to have his garbage dump of an installation hauled off to be disposed of forever. About time. This uber genius is just a hoarder in artist's clothing and gives contemporary artists - already hard pressed for respect - a bad name.

In case you haven't heard, Buchel's "Training Ground for Democracy" was a pretty monumental undertaking, scheduled to have filled the football field sized Gallery 5 at the Massachusetts Museum of Contermporary Art (Mass MoCA) in North Adams, MA where I live. It was to be Buchel's first major American museum work, and by December when he walked off the site, it had already included a two story house, an oil tanker, mobile home, and sixteen truckloads of donations from resideents of North Adams to fill the space.

But Buchel appears to have been stymied by the size of the place, and asked for a full sized and burned out hulk of a 727 plane to fill some of the space. Apparently even adding the defunct North Adams Cinema from Route 8 was not nearly enough to fill the gaping yaw of the gallery. After making many more outrageous demands, the museum said enough and Buchel walked off the job, and conducted negotiations through his lawyers, tying up the site well into its scheduled run. The public never got to see anything.

The exhibition was scheduled to cost $160,000, the artist spent twice that, some $300,000 and Mass MoCA even offered another $100,000 in hopes it might be finished but the artist was adament that there could be no ceiling, no limit to his demands, no discussion, no deal. No shit.

Eventually this all ended up in court, as Rinker Buck from the Hartford Courant so ably reported at:

Now the museum has announced that the entire mess is to be dismantled over the next five weeks and eventually there will be a forum, seminar, or some such event to discuss everything that happened. I hope Buchel attends.

The Museum has a blog that explains it all (from their perspective, of course.)

My own reaction to the unraveling is that the museum should move everything out to the parking lot and have a giant tag sale. They would at least recoup some of the expenses, and maybe the North Adams folks could purchase back their donations. 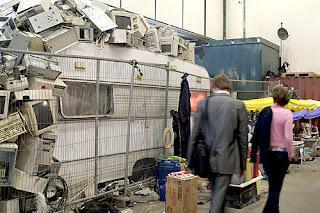 Larry...great to see your new offering. I'll be a regular reader. As to the Buchel affair, enough, already! Boy will I be gald to be able to tell folks who come through town that they can see everything at the Museum. And, yes, kick 'im to the curb!

I think all of us in the Berkshires and beyond want to see Gallery 5 back in use again. Enough with Zaretsky and the other lawyers!