Annie, Get Your Earplugs! Dueling Musicals in May 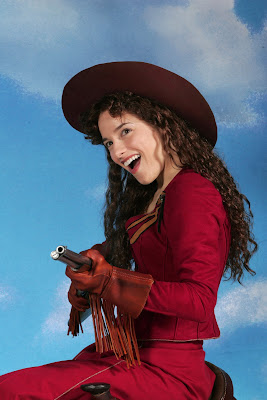 Jenn Gambatese is Annie Oakley in Goodspeed Musicals' ANNIE GET YOUR GUN Photo by Diane Sobolewski.

When Irving Berlin wrote Annie Get Your Gun, he wrote a classic. It's the show that introduced "There's No Business Like Show Business" to the world which has become an anthem. In just a matter of weeks we will have two versions of this great musical within striking distance of the Berkshires.

But like the other famous song in the show, "Anything You Can Do I Can Do Better," it will be easy to pick which show you want to see. You see there is the scaled down MacHaydn version in Chatham, NY which runs from May 27 to June 6 or the Goodspeed Opera House full bore production in East Haddam, CT which runs from April 16 to June 27. If you are a WalMart shopper you will love the MacHaydn version where tickets are only $26-28. It's done in the round, with some pretty fine singers, but there are problems. Certainly having to look at the back of an actor's head is no fun, and doing musicals on a stage that is barely larger than a pizza platter doesn't leave room for much for scenery or choreography. 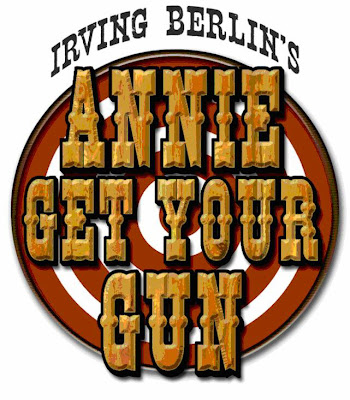 Then there is the matter of the sound. At the Mac it seems limited to a piano and synthesizer to emulate what a band or orchestra should rightly be playing.

The MacHaydn has scores of loyal fans who will no doubt throw their walkers and canes at me for writing such harsh words, but bad music clearly does not seem to bother the geriatric set which predominates, especially at matinees. I apoloigize in advance for the snark attack, but don't you think that when you can't hear very well anyway, it likely doesn't matter much?

I have friends who don't mind. But it is their achilles heel. You can certainly see for yourself and come back and comment here. Tickets and information is available at http://www.machaydntheatre.org/

Jenn Gambatese as Annie Oakley with Jessie, Nellie & Little Jake (Joy Rachel Del Valle, Griffin Birney, Marissa Smoker) Photo by Diane Sobolewski
On the other hand there is the Annie Get Your Gun being staged at the Goodspeed Opera House in East Haddam, CT. This is the upscale version with prices to match. Tickets are $27.50 to $71.00 though what you get is a decent sized group of live musicians, great sets and costumes and a cast that is drawn from Broadway. The Goodspeed has sent more musicals to Broadway than any other theatre company. 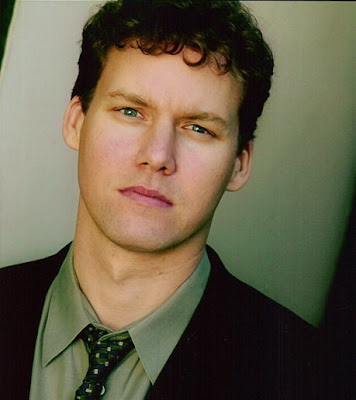 Kevin Earley (above) will play marksman Frank Butler opposite the sharp-shooting Annie Oakley played by Jenn Gabatese (below). 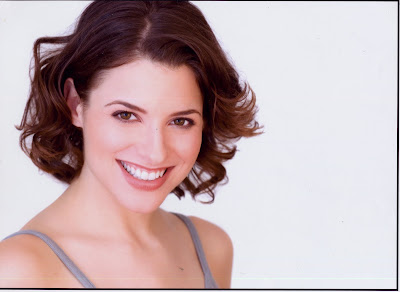 This Annie Get Your Gun will be directed by Rob Ruggiero whose work has been seen frequently in the Berkshires, as well as in award-winning regional theatres around the country. Mr. Ruggiero returns to Goodspeed where he directed 1776, Big River and last year’s sensation Camelot. His off-Broadway and tour credits include All Under Heaven and the world premieres of Ella and Make Me A Song, all of which he both conceived and directed. His newest production, Looped starring Valerie Harper, is currently running on Broadway.

Annie Get Your Gun was first staged on Broadway at the Imperial Theater on May 16, 1946 and ran for 1,147 performances. It was directed by Joshua Logan; Ethel Merman starred as Annie Oakley, and Ray Middleton played Frank Butler. Mary Martin starred as Annie Oakley in a U.S. national tour that started on October 3, 1947 in Dallas, Texas. Martin also did the television version back in the 1950's about the same time Merman was doing Happy Hunting on Broadway.

The Revival Changed a Lot of Songs.
I saw the most recent Broadway revival in 1999 that starred Tom Wopat and Bernadette Peters, an unlikely combination if ever there was one. It was not a success, and having seen it, I think both leads were miscast.

There is a good reason to see both versions: in the past some of the songs have been cut or revised due to the changing political climate and increasing respect for Native Americans. Musicals, often show their age, and this one does, though for those of us who lived through the period in which the original was written (1946) don't seem to notice the disconnect nearly as much as young people who are surprised by the subtle and overt racism. Still, it is a show that has all the classic ingredients including a wonderful score. Don't miss it.