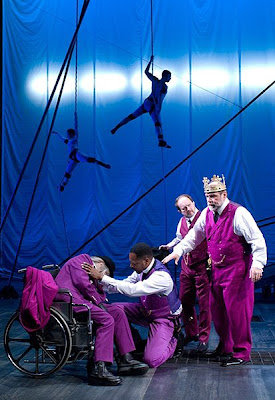 Steppenwolf's Tempest is a feast for all the senses. Photos: Michael Brosilow

Chicago's Steppenwolf and England's Shakespeare, who would have thought it was going to be such a perfect pairing? Never before had the company undertaken the Bard's work, but now they have taken Shakespeare's enchanted masterpiece about the magic of forgiveness and the result is magical. For this effort, Steppenwolf ensemble member Tina Landau re-imagined this classic tale of art, freedom and the transformative power of forgiveness.

Ensemble member Frank Galati returns to the stage as Prospero, his first performance at Steppenwolf since The Drawer Boy with John Mahoney in 2001. Tina Landau has been an ensemble member since 1997 and has staged such inspiring Steppenwolf productions as The Time of Your Life, Cherry Orchard and The Diary of Anne Frank. 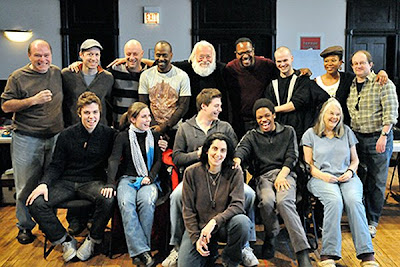 The Director and the Cast on the first day of rehearsals.

The Tempest was Shakespeare’s final work. The story is about Prospero who is exiled to an enchanted island where he harnesses the powers of magic and masters the spirits that dwell there. His desire for revenge drives him to conjure a mighty storm trapping his enemies on the island. The production features ensemble members Alana Arenas, K. Todd Freeman, Frank Galati, Jon Michael Hill, Tim Hopper, James Vincent Meredith, Yasen Peyankov, Lois Smith and Alan Wilder with Eric James Casady, Miles Fletcher, Stephen Louis Grush, Emma Rosenthal and Craig Spidle.

In previews since late March, it officially opened this week for a lengthy run through May 31st. Specific performance and ticket information can be found on the Steppenwolf website. 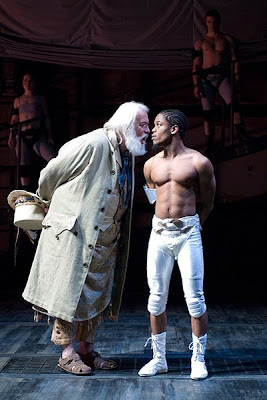 In the photos shown here, it is clear that the set itself is part of the ensemble. In her directives to the scenic designer, Takeshi Kata, Landau set out some guidelines. “The design cannot be too square, too solid, too geometric for this play about sea change, rupture and transformation. The alignment of the space should not be clean. Work against straight lines." The set, she explains, needs to be "immersive," creating an "explosive and disorienting experience." There is no question that she succeeded.
Posted by Larry Murray at 1:57 PM