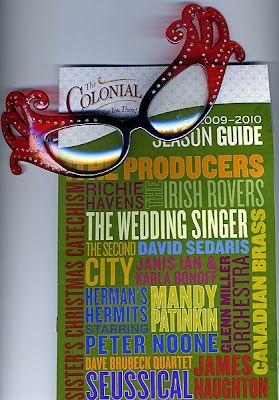 "You mean she's coming to Pittsfield?" 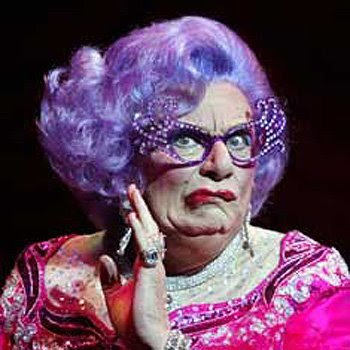 "Oh Possums, there's been a terrible mixup..."
Dame Edna Continues Her First Last Tour at the Colonial Theatre - in Boston

"Oh dear, possums! I had so hoped to play your tiny little Colonial Theatre in Pittsfield, but I guess it was all an April Fool's joke. The rascals in my booking office were sure I didn't mean your beautiful old Berkshires, so they booked me instead in Boston. Well, you will just have to hitch up old Dobbin and clip-clop your way down the Mohawk Trail to the big city where you can really get scalped on ticket prices!" 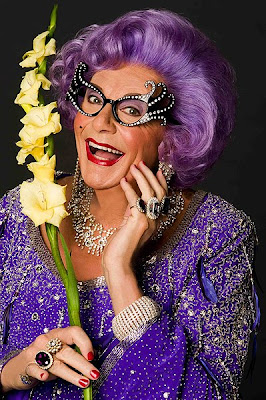 Dame Edna with a Glady
Tony Award winner Dame Edna Everage — international housewife, therapist, gigastar, fashion icon, guru and swami — is sweeping into Boston with her latest touring show, direct from Florida where she has been avoiding our cold New England weather. Entitled Dame Edna - Live and Intimate in Her First Last Tour, the production is scheduled to arrive at Boston's Colonial Theatre April 16 for five performances, concluding April 19.

From Boston her tour will take her to Fort Worth, Los Angeles and San Diego. At no time will it pass through or near the Berkshires.

This is not her first visit to New England. She has traversed the USA (but not the Berkshires) in two previous Tony attracting shows, “The Royal Tour” and “Back with a Vengeance,” Dame Edna’s performances have won a Tony Award and a Tony Nomination plus countless critical awards. In fact, until now, they have received very little criticism. 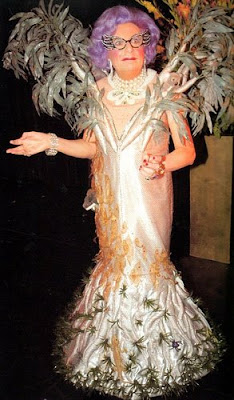 "I had so hoped to have made the Pittsfield Fools Ball, I even had this simple little dress thrown together for the occasion."
Tickets for the Dame Edna Everage engagement are currently on sale through Ticketmaster, or better yet, save the surcharges and buy them directly at The Colonial Theatre Box Office, 106 Boylston Street, Boston during normal box office hours Monday through Saturday 10:00am – 6:00pm.

Dame Edna is currently on tour with her new and uniquely intimate offering which she created on her private multi million acre, possum-infested luxury estate in her native Australia.

On making the announcement, Dame Edna said: “I don’t do shows Possums, I make History!” “In a spooky way I am theater in the making. My shows are really not shows at all, they are not Events; they are MIRACLES which you can proudly tell your grandchildren you witnessed.”

We are pleased to share the results of a brief conversation with Dame Edna: 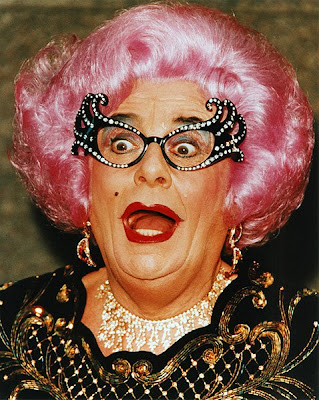 "Don't you think that question is just a little bit spooky?"
Q: Dame Edna what do you do on stage that is so special?
A: I sing, I dance, I give advice to audience members, I glimpse from the stage. It’s group therapy really, shrinks recommend me!

Q: Are you alone on stage?
A: Not exactly, the audience is my support act. I even invite selected audience members on stage, dress them up in more glamorous clothes than they ever dreamt of owning. I’ve also got my beautiful Ednaettes, scrumptious girl dancers and stunning costumes that the men folk would really appreciate if they could ever take their eyes off me. Then there’s Wayne Barker, my handsome award winning musical director on keyboards, who will send you out of the theatre singing.

Q: Will the show make us laugh?
A: We guarantee at least one major laugh per half minute and one falling off YOUR SEAT howling and crying every 3 minutes and 23 seconds. These statistics have been compiled by the Royal British Society of Theatrical Statistics.

Q: Is your show topical?
A: Every show I do is tailored to the city I am playing and audiences feel I’ve actually been living in their midst for years. I hit the nail on the head every time with zillions of up to the minute local references.

Q: Is your show suitable for the family?
A: There are no four letter words or gross obscenities in my show. It’s not for infants, but children love it, seniors adore it, gays revel in it, red-necks worship it, and nice people like you come back again and again. It’s intelligent, it’s caring, it’s funny and compassionate. It’s the show America needs more than anything else right now. 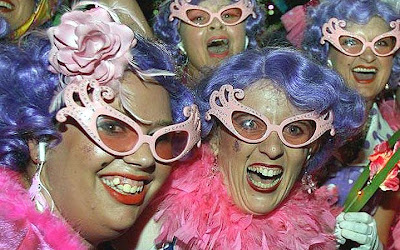 Q: What is your message?
A: The message of laughter, which is the best weapon against world tension that was ever invented.

Q: How do you stay so beautiful?
A: A lot of people say I'm a beauty. I disagree. I'm not traditionally beautiful. I've got a lovely bone structure. I have a beautiful personality, some men find me raunchy. But I don't think of myself as a beauty anymore than I would have thought little Celine Dion is a beauty or Madonna. In many ways you can say they are plain, ugly even, hideous. But I'm beautiful inside. I think its what I radiate that people love. There's an inner beauty there, and it's recognized, and it's rare in a comedian because fundamentally I'm in the business of making people laugh and making people happy. I don't set out to do it. It’s people, they just can't help laughing when they see me and I'm not embarrassed by that. I think it's rather sexy. As a matter of fact, my husband used to laugh. In fact, on my honeymoon he never stopped laughing.

Dame Edna's Tour is funded with support from Friends of the Prostate and Ednacare Switzerland.
Posted by Larry Murray at 12:01 AM