This Wonderful Life at Barrington Stage Sparkles with Life and Love 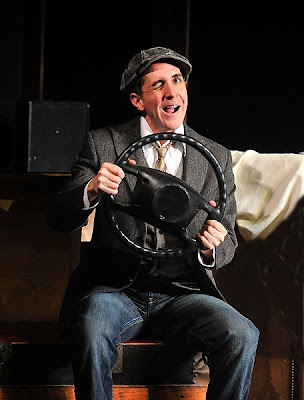 In the film It's a Wonderful Life, George Bailey discovers that his life has made a difference to a whole town. In this rewarding and unusual one-man version of the classic story, Pittsfield's Barrington Stage Company has given their little city a sparkling new Christmas tradition that is bound to warm the hearts of its residents for many years to come. It is so good, I am already planning to take some friends to see it again. Yes, it is that kind of show, so far superior to anything you see on the tube that you don't mind turning off the computer, the Blackberry, the iPhone and switching into full focus mode.

What is amazing about this production is how a few talented people took a classic story, and with props, lighting and sound turned it into a sweeping epic of one man's journey through life. This stage adaptation of the 1946 film was written by Steve Murray and conceived by Mark Setlock. All it requires is one indafatigable actor with unlimited energy reserves and a photographic memory to take up some thirty roles during the course of a nonstop 85 minute journey. The show is performed without intermission. 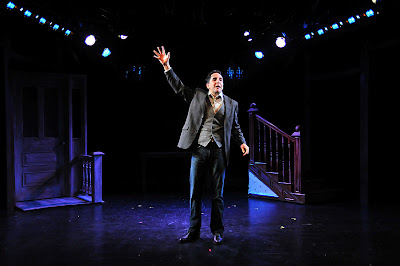 One Actor Fills the Stage With Life

There's no need to recount the familiar story line here, but for the most part it remains faithful to the original screenplay, even though it runs a full hour less than the film. This tightening up of the script is one reason the action on stage never stops, and the audience's attention never wavers. In a one person show, so much depends on the quality of the actor, in this case Tom Beckett. Beckett is probably best remembered for his role as the sound effects man, Mr. Foley, on the AMC series Remember WENN.

Beckett has an impressive Broadway and off-Braodway resume as well, one of many extraordinarily gifted actors who like George Bailey eke out a modest existence, in this case by performing on America's stages. This is his first appearance in the Berkshires, and I hope that we see him again in many other roles in the future. His talent and range are impressive, especially considering that this was his first "one-man" show. He played young and old, male and female, nasty and nice. 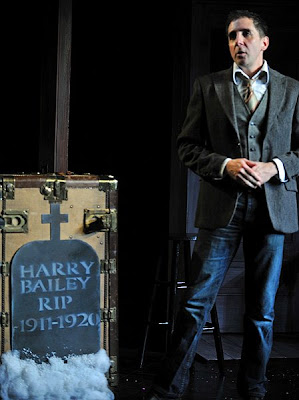 George Bailey discovers his past matters

This Wonderful Life was directed by Andrew Volkoff, who also directed last summer's I am My Own Wife and the 2007 hit Fully Committed at Barrington Stage. This show demonstrates that Volkoff is far from content to stay with the same bag of tricks, he has clearly invented many new ones, and each one-man show he does is more multi-dimensional than the previous one. Artistic Director Julianne Boyd sure knows how to pick 'em. 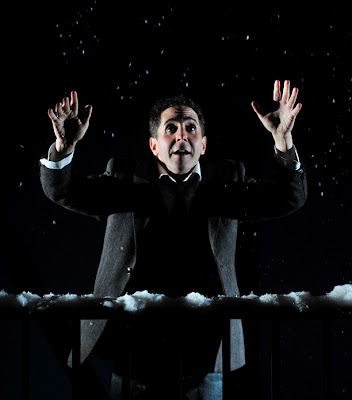 Desperation on the Bridge

In the first half of the show we see the character of George Bailey as a self-sacrificing good guy, full of optimism and willing to defer his own needs in order to help others. In this day and age, as in 1946, this was a hard thing to do. But then - and now - there were - and are - such people among us, quietly doing the right thing. We often take them for granted. Who among us has not had that dark moment of utter despair, as George Bailey had at that snowy bridge, when all seemed hopeless.

Watching that scene touched off a bit of the jaded cynic in me, making me feel more like the evil Mr. Potter than a human being, but as it played out, those selfish feelings were overwhelmed by a sense of camaraderie with George, and it is such moments that give us catharsis in the dark of a theatre. We see we are not alone in our problems. 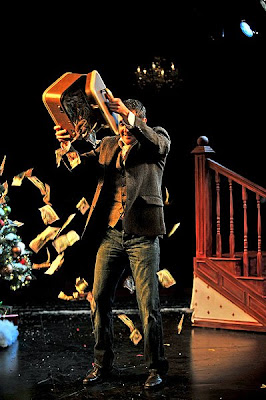 The Happy Ending (All photos by Kevin Sprague)

In the tradition of great storytelling, there is a happy ending. Sweet but not saccharine. Actually it is a bitter-sweet moment, one in which tears of happiness and relief merge, with the net effect of an audience leaving the theatre happy, refreshed and glad to be alive.

And that is the miracle of this Barrington Stage Company production. It renews the spirit, gives us hope, and encourages us all to be more selfless and kind, even when we don't get many thanks.

Well, here's a warm thank you to Barrington Stage. This Wonderful Life is the best Christmas present anyone in the Berkshires could ask for!

This Wonderful Life runs through December 20 at Barrington Stage's Stage 2 located at 36 Linden Street, Pittsfield, MA. Performances are Wednesday and Thursday at 7, Friday at 8, Saturday at 2 and 8 and Sunday at 3. You can call for tickets at 413-236-8888 or online at Barrington Stage Co.org

One note: In welcoming the opening night audience, Julianne Boyd explained that due to state budget cuts a chunk of money they were counting on was sliced away, and that to meet a challenge grant, they still needed to raise an additional $70,000 to replace it by the end of December. It's time for those of us in the Berkshires to step up to the plate. This is a company that puts the magic of theatre into our lives not only in the Summer, but year round.
Posted by Larry Murray at 11:05 AM