A Date with Elizabeth Aspenlieder 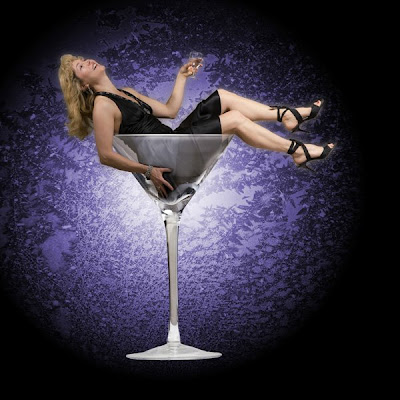 With New Year's Eve you get a hangover but with Elizabeth Aspenlieder you get laughs. (All photos by Kevin Sprague.)

(My review of Bad Dates is now available at Berkshire Fine Arts. I recommend it highly.)

The Wall Street Journal called her "One of the funniest actresses on the East Coast," causing her career course to change. As one of the regular company members at Shakespeare & Company in Lenox, Massachusetts, she spends her summers playing drama and tragedy as well as comedy. But with 2007's Rough Crossing, and this past summer's The Ladies Man, she has honed her gift for making audiences laugh.

Shortly she will assume the identity of Haley Walker, a brassy divorced mom with a teenage daughter, her new starring role in the one-woman tour-de-farce, "Bad Dates." 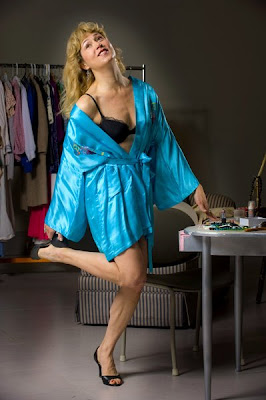 Aspenlieder makes it feel like Haley is sharing her innermost secrets just with you.

Scheduled for a winter long run from January 9 to March 8, Aspenlieder will have the task of keeping things light and funny during a sometimes dark and dreary season. Written by the immensely gifted Theresa Rebeck, Bad Dates is a sharp-tongued, ironic look at what multi-tasking women have to cope with today.

How do you survive as a single mother and working mom while searching for elusive romance in a devious world? How do you pick shoes to wear from a collection of more than 600? How do you know if you've gone over that invisible line?

It is from the familiarity of these situations that much comedy can be extracted, and watching a recent rehearsal, it is amazing what Haley's daily diary of dilemmas discloses.

Under the firm hand of director Adrianne Krstansky, Haley is always in motion, fussing with her appearance, and fulminating about her latest mishap. Although alone on stage, Haley is constantly monitoring the reaction of her guests. "The audience is having a two way conversation with her the whole time," Krstansky notes, "and is brought into her life in a very personal way."

What David Mamet does for na'er do wells and petty con-men, Rebeck does for the women who date them. "Is sex that much more fun for men than women, that they'd do it with just anyone? That would be one conclusion. The other would be that maybe men don't have enough to think about." 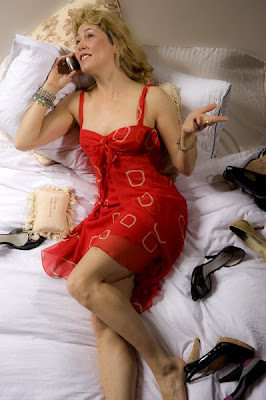 How many pairs of shoes?

You can preview this show by visiting its website and a video blog that Aspenlieder has created for us to enjoy. There is also a "Bad Date Story Contest" in which you are invited to share your horror stories. The first entry is hilarious.

One final note. If you are a Berkshire resident you can get some pretty serious discounts on tickets at Shakespeare & Company, too, many performances are 40% off regular prices. In this case you will pay $21.60 for previews and $28.80 for the rest of the performances.

And here's tip to the guys: if you think this is a show for women, and pass it up, you lose. There is more valuable information about getting dates, and getting, um, results, than you can imagine. Be smart. Go. It will be a good date...for both of you.
Posted by Larry Murray at 3:32 PM