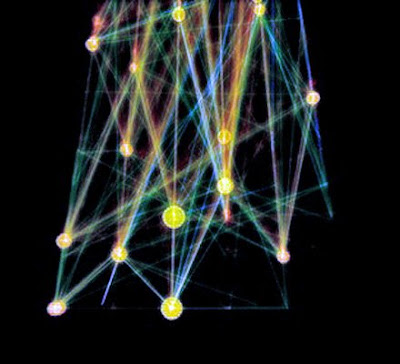 When you can't compose or play music, this is what you do. You let serendipity do the work for you. Composer John Cage was among the first to do this, and his results still set a high standard of nonsense for others to emulate, follow and perhaps even top.

The Fragmented Orchestra is such an effort. Jane Grant, John Matthias and Nick Ryan have modeled this project on the neurons in the human brain. Of course the brain can make millions of connections and is organized in an incredibly complex way. So the first task of the creators was to dumb down the human brain's functions to that of a gnat, or something even simpler. They have selected 24 sites scattered across the UK and connected them together in an ersatz "neural network". They then capture sonic information at each individual site and use the internet to make the other sites "fire". There is a video demonstration of this on You Tube.

Serious art or satire....that is the question. You can decide by visiting their site and playing with it for a while. You can add and delete sites and put together your own compositions.

Having both watched the video presentation and mucked around their website, I say it is a pompous bore. Your opinion may differ. These kind of random artistic experiments are becoming rather commonplace. Recently, right here in rural Western Massachusetts we had another, consisting of various lamps that flashed off and on in interconnected galleries. 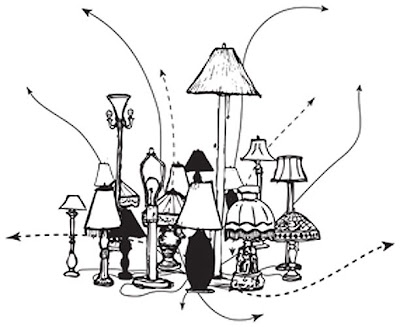 "Lumens" used borrowed lamps from residents of the Berkshires.

Called Lumens, it was an installation by artists Ven Voisey, Sean Riley, and Matthew Belanger of Greylock Arts which is discussed here and also here.

The concept was to (re)connect North Adams and Adams. It was housed in two galleries, Greylock Arts in Adams, and the MCLA Gallery 51 Annex in North Adams. Excuse me while I yawn. In the end It held my interest for about six seconds. I guess I just don't get it. It was about as exciting as listening to my Rice Crispies, or that old cliché, watching paint dry. This sort of art is what I call theoretical art. It is more interesting to talk about as a concept than to see.

In the end, Turbulence, the site that records and documents this work is far more interesting than the work itself.
Posted by Larry Murray at 10:59 AM