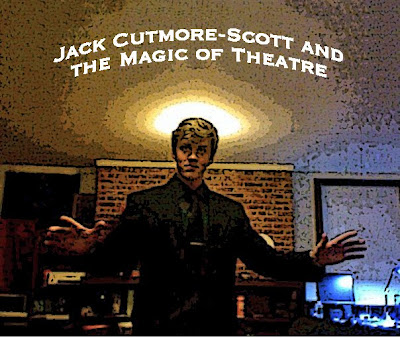 An Actor Prepares.
When young actor Jack Cutmore-Scott, 22, strides onto the stage at the Boston Center for the Arts on March 11 in Entertaining Mr. Sloane, it's going to be a magical moment.

Bostonians will finally get to see this promising performer, a Harvard Senior, in the flesh. For all his theatrical credentials, this is really his first public professional appearance in the USA. The Publick Theatre is known for its crafty casting, and Cutmore-Scott not only looks the role of Mr. Sloane, he promises to follow in the footsteps of others who have used the role (Maxwell Caulfield and Chris Camack) to make lasting impressions on audiences. 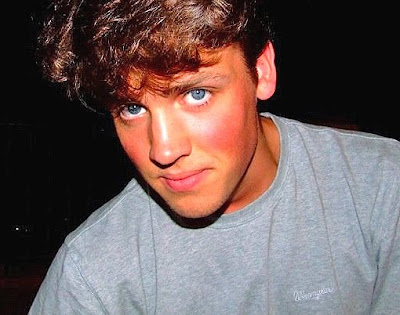 Only 22 and already Jack Cutmore-Scott is a triple threat: actor, writer, director.
We talked with Jack via phone a few days ago as the rehearsal process got underway, and he is clearly excited about the professionals he is working with - director Eric Engel, and a superb group of actors which includes Nigel Gore (Ed), Dafydd Rees (Kemp), and the renowned Sandra Shipley (Kath).

Jack grew up in the Chelsea section of London, not far from Sloane Square. Perhaps it was a prescient sign that the role of Mr. Sloane in Joe Orton's comedy would one day be his.

He arrived at Harvard in 2006 to begin his studies and has undertaken a whirlwind slate of extracurricular activities - not just theatre, but film and television too. In a few short years he has performed in a dozen plays, directed or assisted in six others, and written (or helped to write) four original scripts. And that is just the tip of the iceberg. 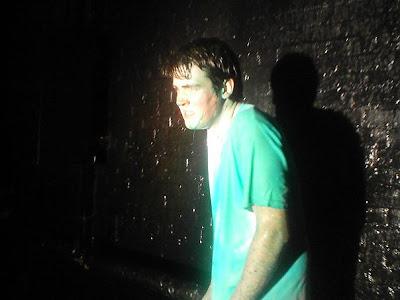 Jack Cutmore Scott has racked up a lot of time on stage, and off. Here he gets drenched for a film.
About a year ago, he took on the title role in Shakespeare's Hamlet, following his earlier outing as Henry V. 2007 is remembered for his Max in Martin Sherman's Bent about the fate of gays in the holocaust. Most recently he appeared in Sartre's The Flies as Orestes.

But Cutmore-Scott is far more than just an actor. Last summer he wrote, directed and appeared in Breaking Up at the Loeb Experimental Theatre. It is clear that it is not just acting and applause that appeals to him, but the whole concept of theatre as a collaborative craft.

As a Senior, he is looking forward to graduating this year, and while his studies have concentrated on English and American Literature and Language, it is the theatrical side of his Harvard education that appeals. 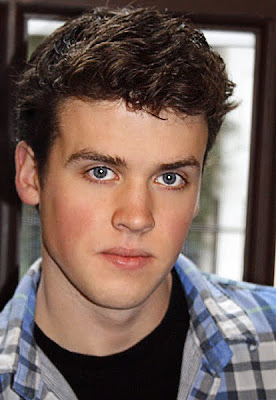 Jack Cutmore-Scott as Mr. Sloane is irresistible. Susanne Nitter photo.
"Once I graduate I would like to continue doing what I have been doing here. Acting of course, but also directing and writing. I will likely head to New York City to try my luck there. But for me it is as much about making shows happen as actually being on the stage," he said. With this sort of wider view in mind, Jack is unlikely to remain available for long.

Jack's C.V. is already chock-a-block full of amazing credentials. After training with the British National Youth Theatre, he did a year-long stint at London Academy of Music and Dramatic Arts before taking his original play, Making a Scene, to the Edinburgh Fringe Festival. It was well received.

But, we wondered, how did this all start.

"My first audition was almost by accident, and I ended up with a walk-on, walk-off role. But it introduced me to the world of theatre. Just watching the rehearsal process was the most amazing experience for me. Observing how the director worked with the actors revealed what interesting people they were," he said. Indeed, for many people seeing theatre people at work picking at the words, looking beneath the surface of things opens the mind to an expository way of looking at life, reading between the lines and seeing what is really going on. It is addictive.

"You pull it all apart, and then put it back together when you finally do it for real on stage...it's exciting," noted the actor. "And I find that often you get more out of the rehearsal process than you do onstage. You learn about yourself." 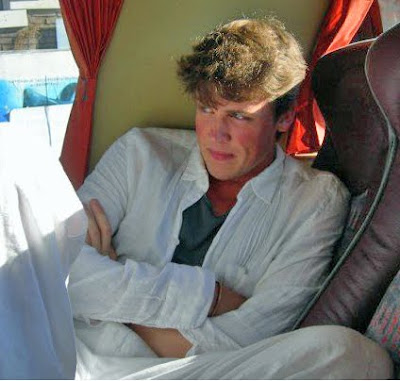 A rare moment to himself.
We turned to the Joe Orton play. Directed by Eric Engel, Entertaining Mr. Sloane  revolves around the charming, enigmatic Sloane as he arrives to rent a room from Kath (Sandra Shipley), a lonely, delusional landlady, in the junkyard house she shares with her declining father, Kemp (Dafydd Rees). A handsome opportunist, Sloane quickly ingratiates himself, entering into seductions offered by both Kath, and her estranged brother Ed (Nigel Gore), who soon employs Sloane as his driver. Sloane’s past misdeeds and the dueling affections within the family soon collide, leading to a desperate act that proves the limit of his charms, and reveals the ruthless and cunning strategies that Sloane’s victims will engage in to preserve their unique arrangement. 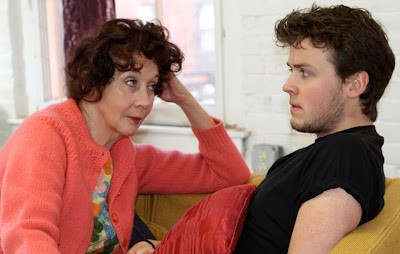 The delusional landlady Kath (Sandra Shipley) and cunning yet charming new tenant Mr. Sloane (Jack Cutmore-Scott) test all boundaries at their first meeting in Joe Orton’s dark comedy Entertaining Mr. Sloane. Susanne Nitter photo.
I wondered if the play, first performed in 1964 has stood the test of time. "It's still very contemporary, and still speaks to us," said Cutmore-Scott. "Nevertheless," he says, "I am still grappling with the role of Mr. Sloane. He is a very fascinating and bombastic character. As we work through it scene to scene I keep discovering something new. I try to remember it all, and Eric (Engel) has been terrific in helping me resolve the motivations behind his actions. They are, after all, pretty crazy characters and they do some pretty crazy things."

According to Engel, “The play is almost a farce, in which all four characters, because they are desperately lonely, allow their domestic, social and animal instincts to become irrevocably intertwined.” He adds, “Orton eliminates the line between the obvious and the Freudian, making things all the more confusing and delightful. Entertaining Mr. Sloane is a perfect play for today's audiences, who can explore sexuality with intrigue and open minds, rather than fear and judgment.”

The young actor seems to balance his demanding studies and extracurricular activities pretty well, though there can be an element of surrealism to them. "There are moments I feel a bit like a sponge, and others when people look at me like I am nuts. When I am riding the T for example, I am usually immersed deeply in my studies, and I tend to mumble absent-mindedly as I am stuffing material into my brain. If I glance up, the looks I get from the other passengers can be quite unexpected," he laughs.

"Sometimes I will take out my cellphone to cover, but when you are actually underground, and the phones won't work I just have to live with the looks."

Three different moods in one day.
"During my freshman year, I had a different problem. I would talk to people and they would look at me blankly because of my accent. But after four years, things are getting better, and I can pretty well understand American, too," he chortles. Cutmore-Scott once told the Harvard Crimson that the english accent is "my unfortunate and totally incurable speech impediment which I’ve had since I was a baby. But it is also my sexiest physical trait."

Entertaining Mr. Sloane is set in England, so his accent should come in quite handy in the months ahead.

Who knows, he might even write a play about it someday.

THE PUBLICK THEATRE
Under the leadership of Producing Director Susanne Nitter and Artistic Director Diego Arciniegas, The Publick Theatre has experienced a renaissance, garnering critical acclaim, including for last fall's Who's Afraid of Virginia Wolf with Tina Packer, Founding Artistic Director of the Berkshire's own Shakespeare & Company in Lenox.