Shakespeare Conference Held in the Berkshires 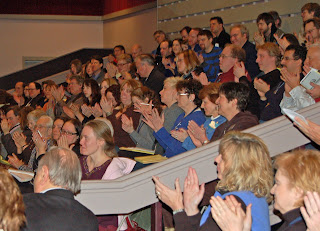 The Bernstein Theatre was packed with attendees.

Tina Packer from Shakespeare & Company welcomed more than a hundred members of the Shakespeare Theatre Association of America (STAA) to Lenox for a conference on the theme of "Revolutionary Shakespeare". More than five dozen performing companies were represented, from London's Globe Theatre and the Stratford Shakespeare Festival to grass roots efforts such as the Los Angeles Women's Shakespeare Company and the Boston based Actor's Shakespeare Project. Speaking to father and son team of Ben and David Evett, it was clear that this was far more than a reunion of Bard enthusiasts, but a productive meeting of creative minds intent on keeping Shakespeare vital and alive. 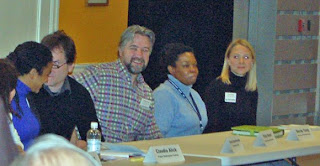 Packer commented that the gathering was more like a party than a family reunion: "There were lots of new and exciting people to meet and draw ideas from." Philip C. Sneed, President of the STAA expressed the concern shared by all: "Many of our theatres have been ravaged by the effects of the global economic meltdown, and some of those here have come close to shutting their doors." Shakespeare, too, suffered huge reverses and obstacles in his time, including his theatre burning down, but like the attendees, he picked up the pieces and struggled on.

"Given this," he continued, "we must address the new economic realities. We need to be revolutionaries in how we confront painful choices in the months and years ahead...that Shakespeare will continue to guide and inspire us to the levels of imagination and creativity we need to survive in tough times." 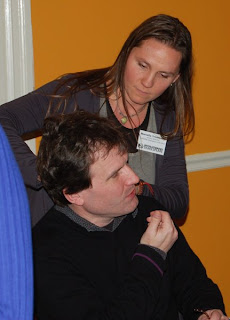 The sessions covered a wide range of topics. The discussion of building new audiences honed in on a little known phenomenon. Most of the Shakespeare companies have educational programs in the schools. I have always thought of them as force-feeding children a diet of difficult language and developing an appreciation for the Bard. Instead, these innovative companies have found creative ways to make Shakespeare relevant to the youngsters lives, and in the process develop them not only as audiences, but also a reservoir of community actors. 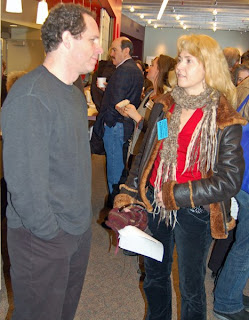 The discussion was led by Dawn McAndrews from the Shakespeare Festival of St. Louis, and included Shakespeare & Company's Director of Education Kevin Coleman, Alison Carey from the Oregon Shakespeare Festival, and Tom Evans from the Actor's Shakespeare Project. Most companies reported that when done right, they have to turn children away who want to be part of these programs. In addition, when they finish their learning encounters, they bring their parents and neighbors into the theatre, many of whom return to see full fledged productions. They have discovered that Shakespeare is not so foreign after all. 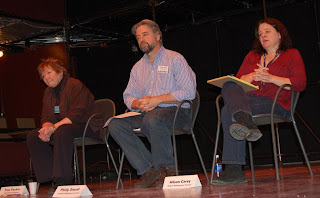 Not content with performing only Shakespeare, virtually every company offers works by other writers. A discussion about how Shakespeare was really a historian of his time took this notion to a new and higher level. It was revealed that several companies are actively working on U.S. History Cycle of original plays. Tina Packer explained how Shakespeare's "History Plays" informed the citizens of Elizabethan times while entertaining them, and how new plays can become the "voice of the people" once again.

The subject of building new audiences for Shakespeare was a very popular break-out session.

Packer used the example of her company reading the Declaration of Independence out loud, and how it has since became an annual event, one of the most popular July 4th weekend events in the Berkshires. "We the people is meant to be read aloud, and speaks directly to each of us about how and why we came to be as a nation," she noted, and "so we have undertaken to commission playwrights to go and speak again to the people, and write what they hear." 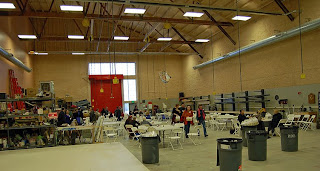 Box lunches in the Scene Shop gave everyone a chance to meet and mingle.

Participating in this effort are two other companies, with more to come. The Oregon Shakespeare Company's Alison Carey, who led the discussion revealed that up to 37 new plays would be undertaken over the next nine years. Phillip Sneed from the Colorado Shakespeare Festival noted that some $400,000 has been located for this purpose through grants and services from corporations, foundations and the NEA. He noted that these histories would not be purely academic studies but rather provocative works that entertained. 'Sometimes you have to ignore the facts to tell the story," he added with a smile. 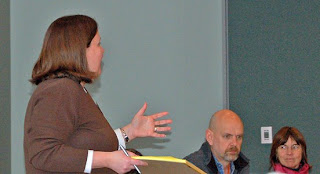 'I see this as theatre in service to the citizens," Packer noted. "The question we are asking is just what does it mean to be an American these days? It is a question that the people themselves must answer, and we want to give them that voice." 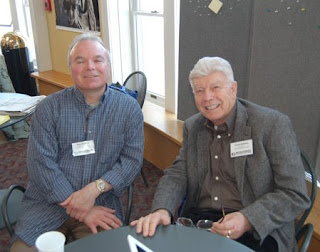