Romeo and Juliet too "Impure" for Nashville, Shakespeare Censored 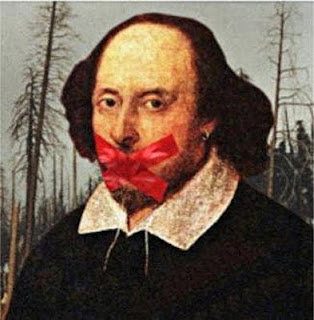 Tennessee, home of great ribs and backward thinking, is in the news again. This time its citizens demanding that Shakespeare's classic Romeo and Juliet be censored. Seems the 400 year old play is too racy for its high school students. This was the claim of a group of self-appointed censors who found the Bard of Avon a bit too bawdy for Music City, U.S.A. They requested a number of cuts to Shakespeare's text in order to tone down the play he wrote. The theatre company refused and went with what the Bard wrote instead of a watered down version to please the nabobs.

Most of the upset is was about some of the bawdier scenes with Mercutio and the Nurse. But Romeo and Juliet also shows two teenagers disobeying their parents, and this gets some of the Nashville fundamentalists in a tizzy. A woman who identified herself as Val, a home-school teacher complained that she "struggled being here with my son. The sexuality was too much. Our children need to be more pure." The full story is in The Toronto Star.

If you want to see what all the fuss is about, you can enjoy The Acting company's splendid production of the classic at the Colonial Theatre on February 12.

Meantime, chalk up another one for Tennessee where the Butler Act was passed by fundamentalist Christians in 1925 banning the teaching of the theory of evolution in all public schools and colleges. This of course led to the famous Scopes (Monkey) Trial which made the state a laughingstock, and the anti-evolutionists haven't stopped trying to turn the clock back to the dark ages since.
Posted by Larry Murray at 1:33 PM

I am the Education Director for the Classical Theatre Project and I am a native of Nashville. What has been reported in the media about our production of Romeo and Juliet is untrue. We were never asked to cut any lines from the play. The people of the Tennessee Performing Arts Center have been great supporters of the Classical Theatre Project and this production of Romeo and Juliet.

We did have discussions about the the physical actions during the bawdy lines (Mercutio putting the Nurse's hand on his own genitals during the "prick of noon line" or Sampson using his arm between is legs as his penis and wiggling it about on the "maidenheads" line), but TPAC left all decisions up to us as a company. To repeat: they NEVER tried to cut any lines from the play.

Unfortunately, that doesn't sell papers, so the story became grossly distorted in favor of sensationalism.

The response to the show in Tennessee was overwhelmingly positive (you can see the comments on our Facebook fan page for evidence of that). We did have a couple of teachers take their classes out, but we've had complaints about sexuality in the production ever since we first produced it in 2006 in Toronto. Yes, that's right, even Canadian teachers wrote letters of complaint. Since I started this job about five years ago, I learned that our society in North America is much more sensitive about sex than violence. We've never received a complaint about some of the graphic murders depicted in our plays, but we have regarding the references to sex in Romeo and Juliet.

I believe it's important to point out the difference between the reaction of a few audience members and the behavior of a major cultural institution. The papers suggest that some official body wanted Shakespeare's text altered, and that's just false. As far as the reactions of the audience members, we received three standing ovations during our week in Tennessee. As for those few who walked out, I noticed that the only time teachers left was when the actor playing Mercutio stood on the armrests of the students seats in the audience and then simulated sodomizing someone during the Queen Mab speech. When his movements were not so graphic, nobody left the theatre. So, even for those few who did leave, were they reacting to Shakespeare's play, or the the graphic actions in the actor's portrayal of the role?

The great lesson in this story is that prejudice goes both ways. In reality, the show was a big hit with students and teachers, and the workshops in the schools were some of the most rewarding we've ever conducted as a company. Meanwhile, the bigotry and hatred directed at Tennessee through the media and blogs like this one has been disheartening to say the least. It's as if people have been chomping at the bit to revel in their own prejudice towards the South. All of this spurred on by a handful of journalists and their unethical desire to wage a culture war.

As a company, we have never been treated better than by the people in Tennessee. The crew and staff of the Dixie Carter Center were fantastic and so were the people at the Tennessee Performing Arts Center. The actors fell in love with the city and several of them related to me that they had the best week of their lives in Nashville. The real shame is that the city and the theater were so slandered in the press, that the company will probably not get invited back to town.