30 Years of Shear Madness - Will it Never End? 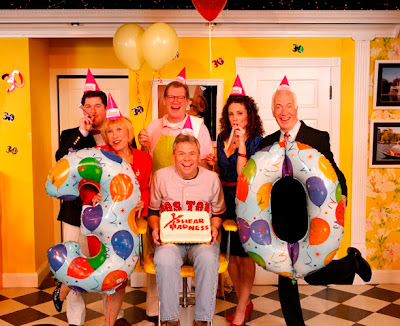 Cheers for 30 Years of Shear Madness! (l to r and back to front) Boston cast members Christopher Robin Cook, Patrick Shea, Jennifer Ellis, Ellen Colton, Michael Fennimore and Richard Snee. Paul Lyden photo.
Shear Madness, the comedy whodunit that holds the Guinness record as the longest-running play in the history of the American theater, will celebrate its 30th Anniversary at The Charles Playhouse Stage II on Friday, January 29, 2009 (the show’s 12,580th performance). I have seen and totally enjoyed it a half dozen times, and for those of us in the hill country, there is an interesting fact: This show began not far away, in Lake George, and its creators, Marilyn Abrams and Bruce Jordan, live in Latham, New York. And you can bet that lots of the actors appearing in it have trod the boards in Williamstown, Lenox, Pittsfield and Stockbridge. How's that for a local connection! 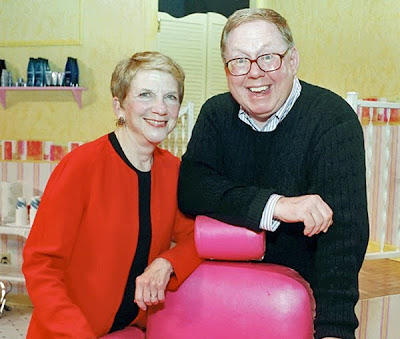 Marilyn Abrams and Bruce Jordan modesetly accept full responsibility for three decades of madness.
Twenty years before shows like Tony and Tina's Wedding, Bruce Jordan discovered how much fun it is to involve the audience in the production. That's what sets Shear Madness apart from all the other long running plays - it varies each night, as the plot changes with audience input. Back in Lake George, where it began, they started experimenting with the formula. " When the audience got to question the suspects, the suspects would try to defer having to answer some of those questions through humor -- so that is where the little egg of humor began," says Jordan.

The show soon was playing in Boston on Warrenton Street, and word of mouth was sensational. It became a favorite (and still is) with groups and lots of folks who normally don't attend theatre. Millions have seen it not only in Boston, but in more than 40 cities and 85 international productions. Still an impressive 1.8 million have bought tickets at the little Charles Playhouse alone. (pictured l to r) Nick Rossetti (Michael Fennimore) and Tony Whitcomb (Patrick Shea) in Shear Madness, the hilarious interactive whodunit. Paul Lyden photo.
The legendary Boston production is set in a Newbury Street salon, and engages locals and visitors alike as armchair detectives to help solve the scissor-stabbing murder of a famed concert pianist who lives above the unisex hairstyling salon. The show combines up-to-the-minute improvisational humor and a mixture of audience sleuthing. To keep it fresh it also incorporates frequent references to the latest media scandals and local news items.

“We love to be on the cutting edge,” said director Michael Fennimore. “Our goal is to have 30 new jokes and clues in the show for the 30th Anniversary night. Our actors are such talented improvisers they love to create something fresh and funny at every show.” 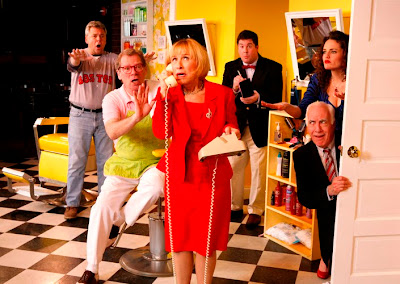 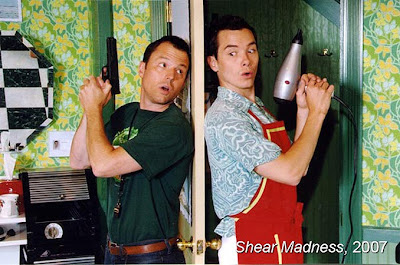 Shear Madness returned to its Lake George Dinner Theatre roots in 2007 with a fresh producton.
The History: In 1978, Abrams and Jordan - the show’s creators, producers and original cast members - first performed a serious version of the play based on Scherenschnitt, written by German writer and psychologist Paul Portner, in Lake George, New York. Jordan, the original director, sensed the comic possibilities of the piece and turned it into the topical spoof, Shear Madness. Because they were on stage each night, Abrams says they experienced the “magical chemistry” between the actors and the audience.

The audience response to Shear Madness was so enthusiastic that Jordan and Abrams decided to purchase the world stage, screen and television rights to the play. Cranberry Productions (as in, they are quick to explain, ”What else goes with a turkey?”) was created to nurture the hit that they had cultivated.

With complete financial and artistic control over the show, they now had an enormous project on their hands. Based on the encouragement they received from New England visitors to Lake George, they decided that Shear Madness just might work well in Boston. So after more than two years honing the comedy, Abrams and Jordan moved their little show to The Charles Playhouse. The rest, as they say, is history. 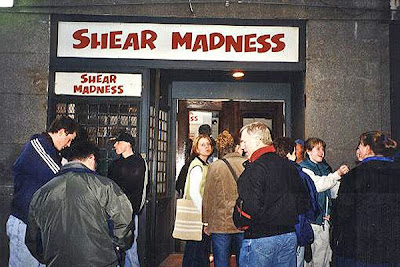 Entrance to the Fun House where Shear Madness plays.

Boston Performance and ticket information
Performance schedule is Tuesday through Friday at 8PM, Saturday at 6:00PM and 9:00PM and Sunday at 3PM and 7:00PM at The Charles Playhouse, 74 Warrenton Street, in the heart of Boston's theatre district. The Friday, January 29th gala performance will be at 7:00 PM Single tickets are $42. For tickets and information call the Shear Madness box office at 617-426-5225. Great discounts for groups of 15 or more. Visit www.shearmadness.com for more information.

All proceeds from the special anniversary performance of Shear Madness on January 29 (7pm) will be donated to the Actors Fund of America.
Posted by Larry Murray at 11:31 AM