Only a few movies have ever reached the billion dollar mark in ticket sales, and James Cameron's Avatar joins that rare club in just 18 days. There are less than a handful of other films that have reached such stratospheric heights and they include Cameron's "Titanic" which grossed $1.8 Billion worldwide. "The Lord of the Rings: The Return of the King" and "Pirates of the Caribbean: Dead Man's Chest" are the only other movies to make more money.

Who says the arts aren't important part of our economy!

Granted, Avatar is not some great artistic triumph intellectually, but it is technically and marketing wise. Having cost a reported $300+ million to make, and many millions more to market and promote, when the accounting is all in hand it will prove to be a healthy return on investment. Of course, Hollywood accounting is nothing like real accounting, and more akin to that which is notoriously applied to Wall Street derivatives. 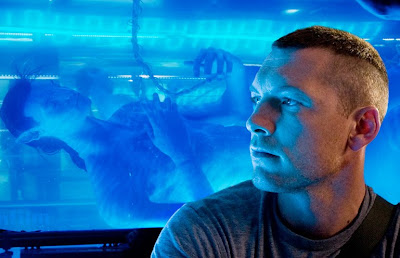 A disabled veteran looks at his new body being grown.
"Avatar" tells the tale of a disabled ex-Marine Jake Sully who is charged with persuading the local aliens of planet Pandora to allow his employers to mine their natural resources. The role is played by Australian Sam Worthington, a former bricklayer who is now the hottest property in Hollywood. He falls in love with the exotic planet's strong Amazonian type woman Natiri, played by Zoe Saldana. Ultimately a love story, nevertheless their developing closeness and understanding are subjected to obstacles which give the film its impact.

Avatar employed a literal army of special effects people, stunt men, creature fabricators, CGI innovators and the like. You wonder how much real acting was required when the actors would spend six hours in a chair getting made up to look like aliens from a Cirque du Soleil planet. Cameron's film also spent its capital on CGI and perfecting the 3D process. 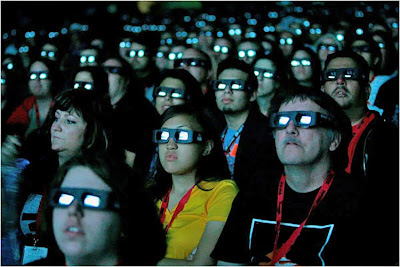 Cameron worked with Sony to reach new levels of technical sophistication, and in the theatres, the 3-D screenings claim a premium $5 or more over the already hefty first run ticket prices. In the Berkshires, the only theatre to show the film in all its glory is the new Beacon Cinema in Pittsfield. One can only imagine how stunning an IMAX presentation would be.

The film itself is an oddity. Because of the romantic angle, and the presence of a strong Sigourney Weaver, it is dismissed as a chick flick and has a pretty cheesy plot which serves as the canvas for the special effects. And it is these that seem to motivate the guys who are mainly buying the tickets.

To me, the Na'vi, who inhabit the planets, and the body Jake moves into are a conceit not unlike that of the thousands of actors who created their own feline appearances in "Cats." Frankly I find them off-putting and silly, and think they ruin what might have been a great movie. But the average public seems to thrive on cheap gimmicks like this, but for me, the Blue Man Group did it first.

Still this is a billion dollar baby now, so who am I to carp. This is one movie you should see in a theatre, but it must be seen in 3-D, and if possible, IMAX to understand that the ground this film has broken is technical, not theatrical.
Posted by Larry Murray at 11:23 AM