The Problem with ART (The Play by Yasmnina Reza) 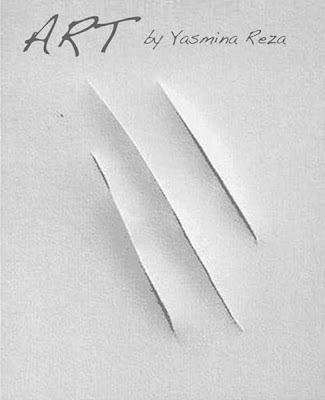 After a seven year run in London, brilliant productions all over the world, Reza Yasmnina's adult comedy Art is making its way to the Berkshires in 2010. The problem isn't the play which is delightfully hilarious. It tells the story of a man who buys a large canvas painted white with "fine, diagonal white scars" for an outrageous sum and then defends the purchase to his friends.

The play is not really about art as much as how middle class men communicate - or rather, don't. Playwright Reza takes a distinctly French feminist skewer to the ways of these typical men. When the discussion turns to "what is art" it is really just one male seeking validation from his peers. We may hear them discussing the purchase, but in truth we are observing the nature of male friendships. 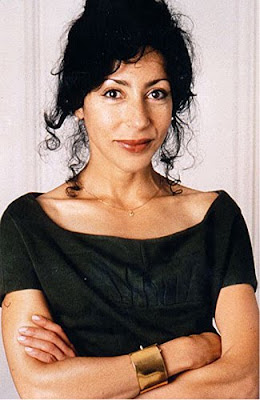 Which is Yasmina Reza, the best writer since Neil Simon or Theresa Rebeck, or both?
Art is a play that takes conflict and differences and makes a darkly comical stew of them. The roles are delicious, and such notables as Tom Courteney, Ken Stott and Albert Finney (the original West End cast) have appeared in it. The three parts are roles that actors can really get their teeth into and perfect their comic timing and subtleties. 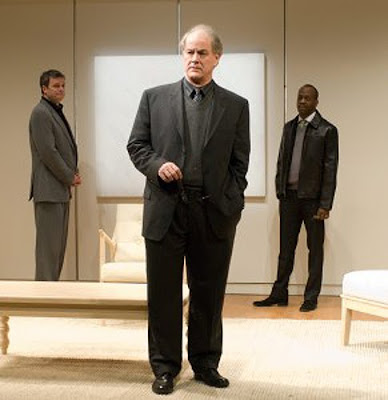 John Procaccino, Francis Guinan and K. Todd Freeman in the Steppenwolf (Chicago) 2009 Production of ART.
Well, what's the problem with Art you ask? Isn't this a sure-fire winner that the cultural Berkshires will eat up? Well, yes and no. The first hurdle comes with its very title, "Art" which can be off-putting to many people. Previous regional productions have had praise heaped upon them, and still the audience stayed away in droves. Regular theatre goers may have been put off by the title, believing it to be too arty-tarty for their taste, As you can see from the sample at the top of this entry the poster that is most often used conveys that artsy feel, not one of an insightful comedy. It is the illustration being used on the Clark Art Institute site promoting an upcoming staged reading.

But I detect some poor communication and cooperation between our arts institutions. It is wonderful news to see that the Sterling and Francine Clark Art Institute and the Williamstown Theatre Festival are collaborating to present a free staged reading of Art at the Clark on February 5 at 7 PM (reservations required - call the Clark at 413-458-0524).

WHen a play is as tough to sell as this one - despite having received 125 productions in 30 translations to date - the logic of cross promotion to help develop audiences for all three institutions is obvious. Instead we have cultural institutions that appear more concerned with their own "branding" (as if they are a commodity like aspirin or frozen pizza) than reaching out and informing and intriguing museum and theatre-goers.

Most importantly, whether an arts aficionado or a theatre maven, do not miss the staged reading. It will delight and surprise you at how witty and on the mark Yasmnina Reza is. And in six months, when the full theatrical version is unveiled with sets, lights, well rehearsed cast and all, you will be able to rediscover the work, and enjoy it from another director's viewpoint. This is the way that the depth of the theatrical experience expresses itself.

I can only assume that this failure to communicate is a lapse, an oversight, and will soon be corrected. Or that it is in the works. One can hope.
Posted by Larry Murray at 4:01 PM