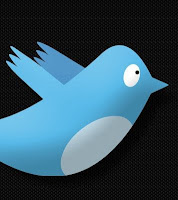 Beating out Coca Cola, Star Trek, HBO and Sprint, the musical Next to Normal which began at Arena Stage in Washington, DC and moved on to Broadway, won an OMMA award for its Twitter campaign. The Online Media, Marketing and Advertising Awards are for internet creativity. The promotion was recognized by the MediaPost Group which sponsors the awards.

They used tweets to retell the show's plot by having the various characters advance the plot via short 140 character messages. They were taken from the book written by the show's author, Brian Yorkey. The responses by others has brought about the creation of a new song about tweeting, to be debuted at a future date.

During the campaign, the number of people following the show's messages topped out at 750,000 or so.

The Twitter campaign for "Next to Normal," much buzzed-about due to its unusually large number of followers for a Broadway show, has picked up an OMMA (Online Media, Marketing and Advertising) Award for online marketing. 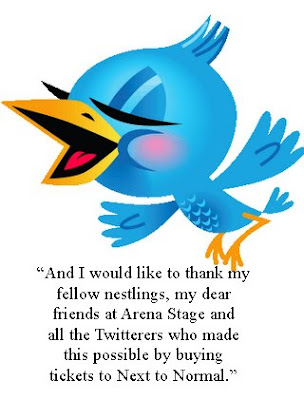 It didn't hurt that the show's campaign was promoted extensively by Twitter itself to keep new participants involved. The drop out rate at Twitter is very high, at least half, and 30% of its users - according to a recent poll - don't expect it to still be around in a few years. It is all a crap shoot. And as the story below this one indicates, it doesn't stop people from claiming that Twitter is worth a billion dollars. The owners must be tweeting a happy tune.

But I wonder how many tickets this ad campaign sold, and how much the effort actually cost compared to traditional marketing methods.
Posted by Larry Murray at 10:25 PM