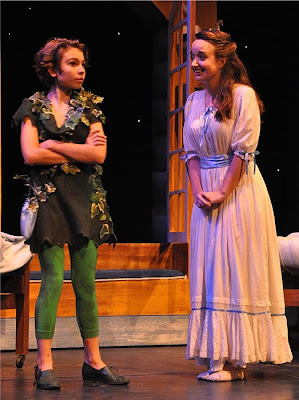 Miranda Hope Shea and Victoria Aldam in Peter Pan.
Berkshire Theatre Festival continues its family programming season with Peter Pan, a musical based on the play by Sir James M. Barrie. The show, which is directed by E. Gray Simons III and Travis Daly, opened on the BTF Main Stage on September 4th.

While not open for formal review, I have to pass along my personal recommendation, having seen it. The production is a real crowd pleaser, well rehearsed and utterly charming. How so many children can appear on stage in the blink of an eye and then flow off again is truly amazing.

This popular children’s story follows the tale of Peter Pan, the Lost Boys, and the Darling children as they journey through Neverland, all the while evading the evil Captain Hook. This is the fourth year of BTF’s community-wide theatre productions. Children from all thirteen school districts are represented in the program. 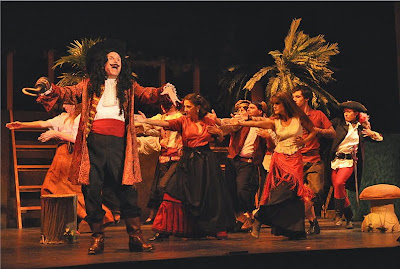 Ralph Petillo as Captain Hook and the Pirate Chorus in Peter Pan.
Peter Pan runs on the Main Stage until September 13, Friday through Saturday at 7:30pm, Saturday and Sunday at 2:00pm. Tickets can be purchased by calling the Box Office at (413) 298-5576 or online. Proceeds benefit the BTF PLAYS!, Berkshire Theatre Festival's Year- Round Education Program.

The cast features over 150 actors composed entirely from the Berkshire County community. Miranda Hope Shea will be playing the title role, opposite Victoria Aldam, who will be playing Wendy. Miranda returns to the BTF Main Stage following her successful debut in Oliver! She has been in the previous BTF productions of A Christmas Carol and was seen most recently as young Edward Einstein in The Einstein Project on the Main Stage. She is joined by her sister Fiona Shea, who is making her BTF debut in the role of Jane Darling. Victoria Flower returns to BTF in the role of Slightly, one of the Lost Boys. She has been in all of the community productions BTF has done and has been seen in A Christmas Carol and Coastal Disturbances.

Mr. and Mrs. Darling are being portrayed by Ralph Petillo and Kathy Jo Grover, both of whom are returning to the BTF stage. Petillo will also being playing the part of Hook for this production. Petillo played the part of Fagin in the BTF production of Oliver! and most recently finished directing the successful BTF Unicorn production of Candide. Grover was also seen in last year’s production of Oliver! as the Undertaker’s Wife. Rider, Tyler, and Cooper Stanton are making a family return to the BTF stage. They have previously been seen in a variety of shows including Coastal Disturbances, Waiting for Godot, and A Christmas Carol. 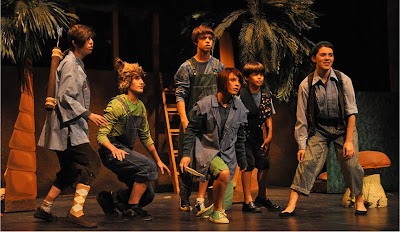 Rachel Plaine is returning as the choreographer for the show. She just finished a year as a BTF Artist-In-Residence, working with local schools in the BTF PLAYS! program and was the choreographer for Oliver! Keating Helfrich, who is currently the BTF Costume Shop Supervisor, is the costume designer for the show. She worked previously as costume designer for Oliver! 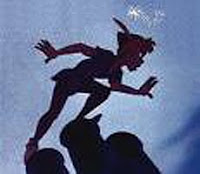 New to the BTF community productions are Chesapeake Westveer and Jaime Davidson, working as scenic designer and lighting designer, respectively. Chesapeake Westveer is also the BTF Props Master and recently completed the scenic design for Faith Healer. Jaime Davidson is the PR and Marketing Director for BTF and also did the lighting design for Candide.
Posted by Larry Murray at 10:36 AM