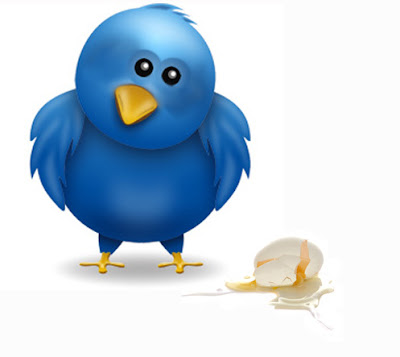 Call it froth, call it sizzle, but don't use more than 140 characters. A billion dollars. That's the value of Twitter according to the esteemed Wall Street Journal, the newspaper of record when it comes to over valuing things from mortgage derivatives to the current story on Twitter's prospects. Wall Street lays another egg. How do you say nineties nonsense?

The investors are valuing Twitter -- which has yet to generate more than a trickle of revenue -- at about $1 billion...The investor group is expected to include mutual-fund giant T. Rowe Price Group Inc. and private-equity firm Insight Venture Partners, which would be new investors to Twitter. Existing Twitter investors, including Spark Capital and Institutional Venture Partners, are also expected to participate in the round, according to the people familiar with the plan.Twitters Value is Set at $1 Billion

We're seen these speculative internet gold rushes before, when IPO's were all the rage in order to monetize some code warrior's sleepless nights of toil creating, say, a website devoted to images of her friend's piercings and tattoos. Of course, theatres, symphonies and other arts presenters have been doing backflips trying to figure out how to get people to tweet short reviews of their productions, not realizing that it is as easy to say "save your money" as it is to encourage friends to "buy a ticket." Besides, the bottom line is it takes more than a few abbreviated words to convince me to attend something. The twitterati have short and shallow attention spans, what with their multi-tasking and everything.

I am a regular visitor to and participant in both Facebook and MySpace (or My Face as my friend Shirley likes to say) and think they are better suited to the future prospects of being adjuncts to arts marketing efforts. Here in the Berkshires just about every cultural group with more than one member is now online, on My Space, and the number of writings on my wall touting this event or that far outnumber those of friends reporting on their baby's diaper condition.

Still, every once in a while somebody posts something really interesting, or novel, and makes it all worthwhile.

But not a billion dollars of worthwhile, no matter what the WSJ says. Let the investors choose their vehicles to ride over their cliffs. Thelma and Louise can do whatever they want to piss away their retirement money. This time let's just not bail them out, ok?
Posted by Larry Murray at 11:54 AM