Time for you to retire, Rozhdestvensky! 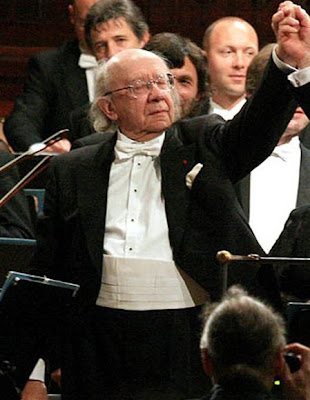 His Majesty, The Petulant Maestro Rozhdestvensky

The Boston Symphony Orchestra, one of the most conservative and polite arts organizations in the entire country witnessed a temper tantrum of seismic magnitude when Gennady Rozhdestvensky, a 77 year old Russian conductor of the old school threw a hissy fit and refused to lift his baton to conduct his contracted performances.

The reason was simply stunning. On a stroll around Symphony Hall he noticed a poster in which someone else's name - cellist Lynn Harrell - got placed above his own. This might have been due to the fact that the concert was part of a series called "The Cello Shines" but for the star conductor, that was beside the point. Then, when belatedly looking over the BSO's promotional materials, he discovered other artists with bigger photos, longer descriptions, and, heaven forbid! larger type.

This lack of deference so angered and insulted the old Soviet Bear that he did the same thing any petulant child would do, he simply refused to go on as scheduled. He took the next plane back to Moscow.

Good riddance. Any mature person would have fulfilled the contract, and not pulled such a stunt. In fact, most conductors are under professional management, and their contracts usually include clauses regarding promotion, just like a rock band. Perhaps he should get a new management company. If any would have him after this stunt.

The Boston Globe lost no time in reporting the diva's temper tantrum:

Perhaps the good news out of this is that a young conductor, Julian Kuerti, got a chance to show his stuff and received a warm welcome as a result. So something good came out of this.

Of course this contretemps pales in comparison with the Vanessa Redgrave flap of 1982. The actress Vanessa Redgrave brought suit against the Boston Symphony Orchestra (BSO) for canceling a contract for her appearance as narrator in a performance of Stravinsky's "Oedipus Rex." BSO cancelled the performance in response to public protest over Redgrave's participation because of her support of the Palestine Liberation Organization. 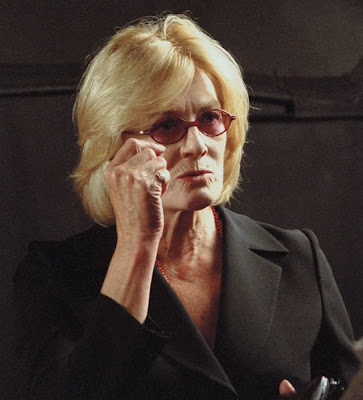 The organization was quite different in those days, naive even, as this quote from Time Magazine clearly demonstrates:

Thomas Morris, general manager of the Boston Symphony Orchestra, is a dedicated man of music who has scant interest in more mundane subjects like politics. He reads newspapers "as little as possible," he says, and "I don't pay much attention to television." So no one was more surprised than Morris at the furor that ensued in March 1982 after British Actress Vanessa Redgrave was hired to narrate the B.S.O.'s planned production of the opera-oratorio Oedipus Rex. Redgrave, as anyone who does read the newspapers should know, is a Trotskyite and ardent supporter of the Palestine Liberation Organization, and her selection immediately inspired an outcry. Faced with protests from musicians, threats of violent disruption, and possible withdrawal of funds by Jewish orchestra patrons, Morris canceled Oedipus, casting Redgrave into the wilderness.

Now Morris, 40, and his colleagues are paying for their naiveté in Boston federal court, where Redgrave is suing the B.S.O. for breach of contract and violation of her civil rights. In testimony that was by turns rambling, deft and once even tearful, Redgrave, 47, argued that the cancellation of her $31,000, six-performance contract effectively blacklisted her for more than a year. The orchestra "may not be E.F. Hutton," her lawyer told the jury, "but when it talks, people listen." Redgrave testified that she was turned down for a role in a Broadway production for fear that her appearance would invite demonstrations. At one point, said the actress, who won a 1978 Oscar for her role in Julia, she was so desperate for money that she agreed to appear nude in an as yet unreleased film called Steaming, for which she earned $100,000.

Redgrave got strong support from Peter Sellars, the artistic director of the Kennedy Center theater in Washington, who would have been in charge of the Oedipus production. Canceling performances because of potential political disruption sets a "dangerous precedent," Sellars testified. "If the Boston Symphony acts this way, no artist is safe."

The Original Time Magazine article
Posted by Larry Murray at 10:24 AM