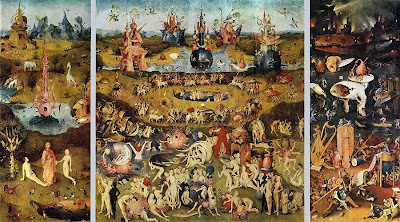 The triptych that is the original source of inspiration

Martha Clarke's The Garden of Earthly Delights is now on stage

I have been fascinated with the painting The Garden of Earthly Delights ever since I first encountered it at the Prado Museum in Madrid decades ago. Choreographer Martha Clarke has brought it to life on stage, though I missed its early incarnations at the American Repertory Theatre some 25 years ago. 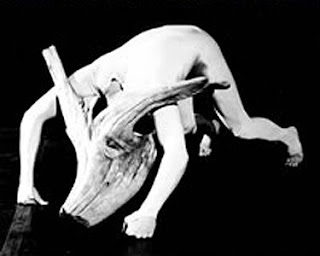 Picture from the 1983 ART Production

After its initial appearance, it has returned in a full dance production and is now on view at the Minetta Lane Theatre in Manhatttan. 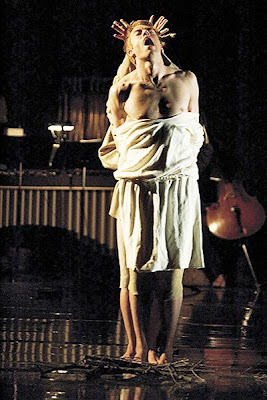 Imagine trying to make the images in this stunning triptych come to life. The painter Hieronymus Bosch, or "El Bosco" as the Spaniards call him, certainly had a 21st Century imagination. Spooky film specialists Tim Burton nor Russ Meyer are not even in the same league. But choreographer Clarke take the Bosch vision on with great success, She doesn't try to replicate all the events depicted on the three panels, but uses them as a starting point for the acid-laden artist's version of Paradise, Earthly Existence and Hell. The painting is from the era when true perspective was not yet developed, so to suggest the crowded canvas, much of her action takes place in the air, with phantasmagorical happenings both on earth and in the heavens. The aerial work is stunning. 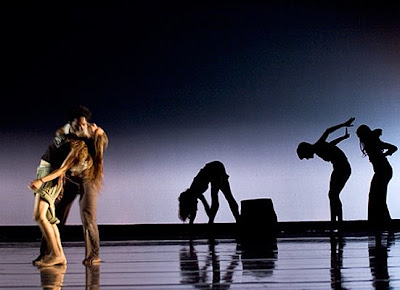 Clarke worked out he original choreography in the early 80's and showed it as part of the American Repertory Theatre 1983 season. Back then Robert Brustein was artistic director, and he was way ahead of his audiences. It also had a short run at the Minetta Lane Theatre where it was originally slated to run until January 18 but a comment (see below) notes that it has been extended to March 1st. People's memory of it was so indelible that Clarke was continually prompted to undertake the enormous task of restaging it. Fundraising for this project was more difficult than putting the production itself together, the New York Times reported today. 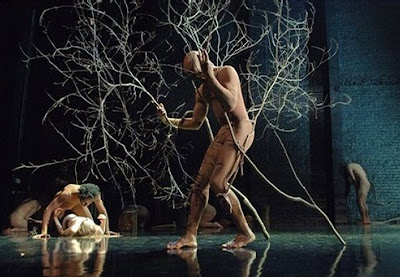 You can view more of Richard Finkelstein's creativity on his wonderful website. Dance photography is a great creative challenge to get right, and he does it with panache.

Larry. You provide no credit information for your last Garden of Earthly Delights Photo. The photo is c. 2008 by Richard Finkelstein and requires attribution (interesting that you do credit other photographers). I'd write you directly but you provide for no contact information.

Sorry for the oversight. I treasure the work of the photographers who capture the iconic images that will live in our memories of each show. I have long believed it is the photographs that help convey the quality of a performance as much as the reviews. I may be reached by email using larry at berkshirefinearts dot com

The article you reference in the New York Times is here: