Gilbert and George - Dynamic Duo or Geeks in Tweeds? 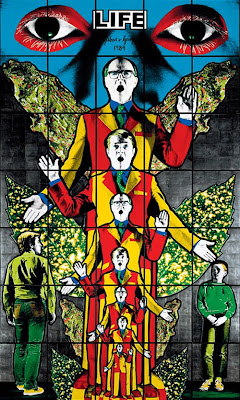 The two British artists, partners in both life and work, have been together for more than forty years, and in that time have been called everything from "brilliant" to "boring". Perhaps that is because so much of their art is both accessible and homoerotic, making their work very popular among the masses, yet a bit of a sin in the world of contemporary art. It is not that the art world does not like gay artists, rather more a protective reaction that overtly homoerotic subject matter makes the horsey set nervous and gives many galleries the vapors. Gay art as a result is usually ghettoized with only a few of the most outrageous (Mapplethorpe) and deeply closeted (you know who you are) making it into the mainstream world. 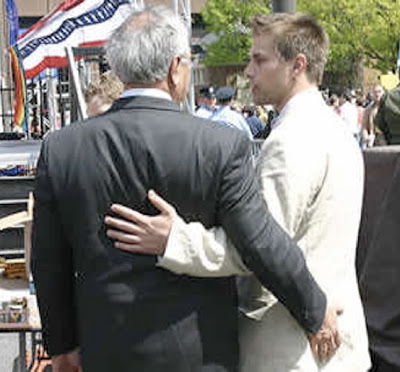 Rep. Barney Frank and Herb Moses were once lovers and are still friends.

We may have just elected a black President, but nobody mentions a same sex couple in the White House. We may have come a long way baby, but don't push your luck, guys. 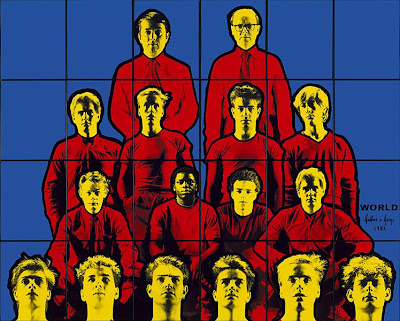 Gilbert and George have an endless "World" of Ideas

There is a thriving gay art world nevertheless, and so when an exhibition of the work by the gruesome twosome opened at the Brooklyn Museum it was met with disdain by the New York Times and delight by the gay press. The exhibition of George Passmore and Gilbert Proesch originated at the Tate in London, and it combines both the fresh and lush appeal of fresh faced young men and the repulsive inclusion of blood, vomit and feces. 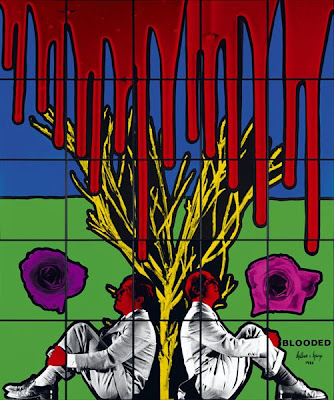 "Blooded" upon the innocent, or as baptism?

They have used these elements since the 19080's and it is clear to me that Andres Serrano took his cues from there, and was simply more perverse, invoking the gag response in many viewers of his latest work. 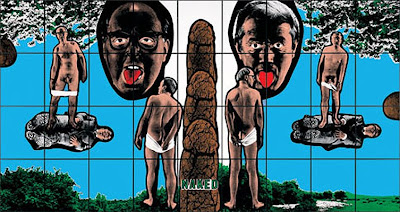 There's a perceptive review in Berkshire Fine Arts talking about some of Serrano's latest work using crap. In terms of the pop-art approach to collages, there is also the riveting work of Miroslav Antic now at the Kidder Smith Gallery. 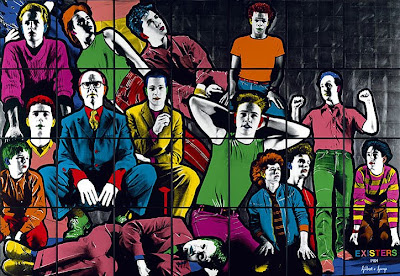 Gilbert and George from the outset wanted to move beyond the stifling and precious confines of the art world and have practiced what they call "art for all" since their beginnings. Gilbert was born in Italy and George in Devon and they met at the St. Martins School of Art in London where they studied sculpture together. 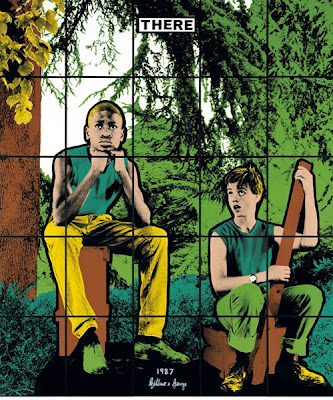 Perhaps there is no there "There."

In 1969 they launched their career as The Singing Sculpture since they were both their art and makers of art. "Underneath the Arches" where they broke into vaudeville song and dance became their signature piece. They were known to perform this ditty over and over while on tour, sometimes for eight hours at a time. You can still find their performances on You Tube to get an idea as to their upbeat approach to both art and life. 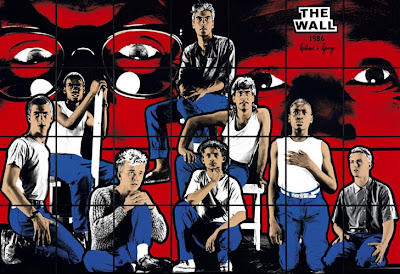 "Wall" could refer to both physical and psychological barriers between people.

Their works are planned very carefully, and often are a series of two to four pieces on a theme. In Shitty Naked Human World (1994) the artists are once again the subject. There are a series videos on how they create their final products at the Tate Museum site. That they are more likely to use graph paper in planning out a canvas is no surprise, though their use of Photoshop to execute the final product might upset those who prefer brushes.

As you can see by the various images their work runs from the commonplace to the unexpected. They use iconic political and religious symbols, as well as views of the people and places they see on their way to and from home. Some even look like sexual advertisements, others like they might be the storyboard sketches of filmaker John Waters. 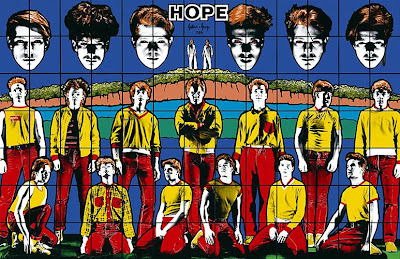 "Hope" could be a campaign poster for Obama.