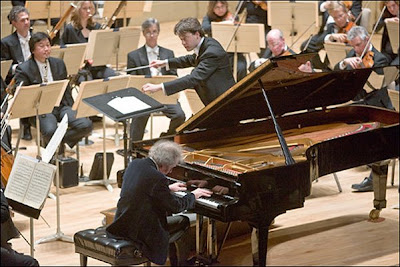 Unintended consequences. When Gennady Rozhdestvensky decided to walk out on his commitment to conduct last weekend's BSO concerts, Julian Kuerti stepped in and rescued the day.

But In order to do this, Kuerti then had to bow out of his appearance this week with the Edmonton Symphony Orchestra. He was scheduled to appear there with his dad, renowned Canadian pianist Anton Kuerti.

Wednesday's concert, entitled Kuerti: Father and Son, was meant to be a two-generation classical music collaboration. But Kuerti, assistant conductor with the Boston Symphony Orchestra, had to step in there instead.

Earlier this summer, Kuerti also filled in for an ailing James Levine as conductor of the Boston Symphony Orchestra for early July performances in the Koussevitzky Music Shed at Tanglewood. Kuerti is the BSO's Assistant Conductor.
Posted by Larry Murray at 8:28 AM

That's too bad for Edmonton. I went to the BSO performance he did a marvelous job.